Where do I begin the account of such a wonderful dog? When he first came into our lives or his last moments? How do I even begin to detail his life and what he meant to us? Can words really say what needs to be said? Are they enough? Will they do him justice? Do I even possess the writing skill to be entrusted with this undertaking? Should I write now, while the pain and grieve is so fresh? When tears blur my eyes and threaten to smudge the paper? I am not sure my questions have answers. I will let the story begin wherever it spills out at, and go from there, perhaps organize the thoughts later on or leave them as they appear. As far as the writing skill goes and the detailing, I’ll do my utmost best.

The night was restless, I seemed caught between wakefulness and asleep, in that state where you no longer have conscious control of your thoughts but you can’t be sure you are actually sleeping. Yet I must have slept, for I dreamed. In fact, it’s how I knew Spencer had passed on. Most of my dreams were filled with him. However, they weren’t of him lying on the kitchen floor, no longer able to stand, each movement an effort, as death was rapidly pulling him. No, these dreams were different. Life was flowing within him. He was trotting outside, filled with energy. Not reluctantly, trudging through cold snow, that chilled his old bones, but triumphantly walking along the snow-free driveway, green grass around him. No sign of old age was in him. He seemed free. However, oddly he still wore his coat, yet that seemed temporary. It was his coat and the overall essence of the dream, that let me know. This wasn’t really a dream, nor was it a fond memory of Spencer’s younger years. This was much more. I believe that it was a vision of his spirit passing on (so dogs indeed go to heaven).  I had a similar dream of my grandpa when he passed away, which is also how I know. I think it was supposed to be reassuring, I’ll see him again and he isn’t really gone, he lives in us and is still a part of the farm like Grandpa. Though, at this moment, it seems like he is gone, he really isn’t, at least not completely. (Actually Jesse echoed this reassurance somewhat this morning when trying to comfort me, “He’s no longer suffering and his memory will live forever in the hearts of everyone who loved him,” and added, “such a good dog he was.”) This is true, yet these consolations will take a few days or even weeks to really take hold in my mind and heart. I’ve tried clinging to the verse “do not grieve, for the joy of the Lord is our strength,” there are many such joys, like Allie, the kids, my siblings, and other loved ones, and smaller things too like birds singing at the feeders, and sunrises and sunsets; however I am grieving even so and probably will for awhile longer but I take hold of this verse, and all the amazing joys around me, to keep the grieve from completely overpowering me or allowing it to last longer than it ought. I lingered in bed longer than usual not yet wanting to face Spencer’s death. I waited until I heard mom was back in the house. Thankfully, she had already placed him in a sheet and covered him up, and set him outside.

When grieving I desire to go on a long, tear filled walk. (I go on a walk every morning anyway). I wanted to go on a nice long walk, maybe even climb a tree and cry; I had tears that needed to be released. While I was putting on my winter gear, Mom told me it was really cold outside; she didn’t seem to want me to go on my walk with the wind blowing so terribly. I held up my scarf and reassured her, I wouldn’t go far nor stay out long. She said, “Ok.” So because of the malicious weather, my walk wasn’t quite as fulfilling, refreshing, or healing. Constrained by my winter clothes, I also couldn’t climb a tree. I also had to hold back my tears because of how fast they’d freeze on my eyelashes and face. I came back in after about twenty minutes. 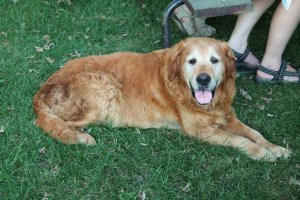 Back in the house and looking at Allie’s very sad face, those held back tears could no longer be constrained; they began streaming down my face. I hugged Allie, my tears dripped on to her fur. We both needed consoling yet couldn’t be. I ran my fingers through her fur, trying to reassure the both of us. Tears still tumbled down my face as I lay on the edge of the couch keeping my hand on Allie until the tears subsided. I cried another three times within the next three hours. For now, my eyes are dry, but who knows how long it will last. Spencer had been a faithful, constant, dear friend for thirteen years. He had been with us through the worst our family experienced. He reassured and comforted me through much heartache and had always been there for me even when it seemed no one else was. Spencer’s death didn’t come unexpectedly, we knew for months time was running out. But there is no preparing or bracing oneself for death even when you have a warning it is coming. It’s always painful, no way around it. It wasn’t a surprise, yet it was still shocking, heart shattering. I’m left with an unbelievable ache, I can’t believe he is gone. I can’t express enough in words just how much he meant to me, how beloved he was.

Perhaps I’ll start with his dying to help remove its sting, and finish the narrative on his life, focus on his life, complete this chronicle on a happy note. The day before he was able to stand and walk around, but he couldn’t stand anymore by last night. He had spent the entire day in the kitchen, scooting himself around. He vomited constantly throughout the day. Even so, he desired to be near us to the very end. It was heartbreaking to hear him throw up yet again, and the smell was sickening. Soon I just wanted him to pass on quickly so he would be free. I told my brothers, Seth and Jonathan, so they could come say goodbye. Seth came early in the day and Jonathan came much later in the evening. I was glad I had told them to come. Even Jesse came to visit for awhile, and before he left he said goodbye to Spencer. Allie was so depressed she came in the house only briefly to warm up, but would shortly beg to go back outside when she saw him. When she came in the evening, after we were done outside, she wouldn’t venture into the kitchen. Spencer was lying such that she’d have to walk closely by him. From the other side, I tried coaxing her to come beyond him but she would stop close to him, sniff and back up. Then she wanted to go back outside. I stepped around Spencer, picked Allie up, and carried her around him. Allie was then content to follow me into the living room. She kept looking at Spencer though, her eyes filled with incredible sadness. Jesse’s arrival and a little while later, Jonathan’s with his kids, temporarily cheered her, if only slightly.  She even walked around Spencer on her own to greet Jesse at the door. Later, with Jonathan and Jesse gone, and Elisa in her room, Mom and I were alone with Spencer. (Allie had followed Jesse outside.) We knelt down beside him, taking turns petting the top of his head. Tears streamed down our faces as we talked to him. Even with death so near, Spencer still tried lifting his head to comfort us; he cared and loved us so much, he wanted to comfort us while he still could.

We told him, “Its ok, you can rest now. It’s going to be alright.” As we were speaking he tried lifting his head again. Mom and I thought it important Spencer knew we were releasing him, that we would be ok.

I told him, “Allie will be ok, and she will look after us and the farm.” I further reassured him, “You don’t have to worry, you have taught her well.” I added, “I love you, we love you, and we always will. We will always remember you.” He needed to hear it and we needed to say it, both for his sake and for our own.

Mom said, “We should let him rest now.” Reluctantly, I stood up and walked away, but not without petting his head one last time. I couldn’t believe this was goodbye.