I was going mushroom hunting, looking for dryads though a few morels would be delightful, I didn’t think I’d find any or at best only a couple. To save some time (I had only an hour and a half before I had to get back to make cheese), I took the truck to the edge of the woods, parked it at the bottom of the hill. Before going into the woods, I surveyed them, trying to figure out where to go in. I wasn’t exactly at the bottom of the hill when I entered into the woods. There weren’t any clear paths in, the trees and shrubs were quite thick. With camera around my neck, knife in one hand, two paper bags in the other hand, I pushed my way into the woods. Unfortunately not soundlessly, branches snapped a few times and my feet crunched on the leave litter covering the ground. Branches snagged my clothes, sometimes nearly taking my hat. I barely stepped under the canopy of trees when I spotted the first couple mushrooms. Medium sized morels, that were getting a little old, probably should have been picked yesterday or the day before that. I was so excited to find a morel so late in the season, so quickly and on my own. I cut a couple and put them in my bag, another was too far gone so I left it. (I meandered all over in the woods, crisscrossed and turned completely around, constantly changing directions, my retelling may not be exactly chronological and individual moments blurred together.) I went up a little and around the tree where I found the morels, ducking branches and searching the ground. Only a few steps later, I started going downhill. There were many deer trails in the woods, allowing more space to stand upright. Morning sunlight filtered into the woods. The woods felt so peaceful, a great place for solitude. Standing under those trees, a green slope, spring flowers blooming, speckled sunlight, I felt my soul uplifted, quieted, I felt worries and cares slough off for awhile.

As I was going downhill, I was searching the bottom, scanning with my eyes, for the dead log with dryads my brother-in-law saw a couple days ago. I didn’t see it but kept walking along near the bottom of the hill but not along the edge of the woods. I walked among elms, oaks, basswood, aspen, ash, black cherry, and box elder, and trying to avoid being stabbed by prickly ash and buckthorn. There was a lot of ducking and near crawling where the buckthorn and prickly ash was thick. Wild geranium distracted me often especially when the sunlight seemed to make them glow. I also paused to look at columbine, water leaf, Solomon’s  seal , violets and ferns. I eyed the box elders for dryads but so far hadn’t found a single one. I turned and saw a white flag running away over windfalls. Crows conversed in the trees over head. A cat bird imitated the sound of a begging kitten. Turkeys called in the field. A gray squirrel soared between trees. Bumble bees buzzed. A chipmunk crashed through a windfall. But perhaps the most wonderful of animal sounds was that of a deer nearby but unseen. I was looking back behind me, wondering if there was a potentially good spot I missed when I heard a “hhfft” of the deer warning me to back off. It was thrilling! Indeed, my soul found restoration here.

After going many yards, I finally spied a beautiful, perfect looking morel above the leaves, bowing, the light emphasizing its texture and gold color. It was a beauty to behold and with a mythical air about it. I cut it and gently set it in the bag with the other two. Then looking up I saw a majestic snag, a long dead oak, textured by birds, insects, mites and weather. Onward I walked to this intriguing tree.

Standing beneath it, I marveled. It had such a presence, and although dead and naked, its bark lay in sheets at its feet, it still supported so much life. I soaked it in with awe and reverence before continuing my search for mushrooms. There, near this tree, was an incredible sight. A gorgeous morel, bigger than my hand stood. Slowly I approached it, trying to be careful of my step as not to trip and yet keep my eyes on the giant. Again with reverence and thankfulness, I cut this morel too and added it to my bag. From this lowered position on the ground, I saw ahead of me a cluster of morels shining like gold (only better) in the morning sunlight. I moved toward them, having to stoop due to the low branches. I marveled at this fairy like sight, then  I began cutting them. Again ahead of me, I saw more, further down and some to the side too. I had left the bag closer to the tree while I was scouting. I dropped my hat by the morel patch and worked my way back to the tree. Grabbed the bag and down I went again. It is amazing what a person will go through to get a morel. I squatted down and moved forward in that position, the whole time being grabbed and stabbed by branches and yet loving every second of it. I started cutting and placing them in the bag, then nearly crawled to the next cluster. I was so elated, I hadn’t found this many morels together before and I found them all on my own. The stunning beauty of them in the sunshine added to the magic and to my delight. 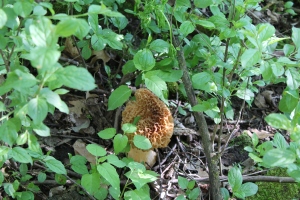 I carefully turned back to the large dead oak to retrieve my other bag, which was empty. There were a couple more morels the other direction but not like what I had already found. I continued along a deer trail, still looking for dryads. It was much further into the woods before I found anymore edible mushrooms. I wasn’t too disappointed, I already found way more morels than I was expecting and the scenery was refreshing, stunning and awe-inspiring. Somewhere, perhaps toward the middle of the woods, I finally found the first dryad saddle. I had climbed up the hill a little ways. And there on the side of a dead tree was the fairy’s saddle I had been looking for. Unlike the morels, it didn’t slice easily. It was wet, and durable feeling, also unlike a morel. Its smell was a deeper woodsy scent. Into the empty bag went the dryad. Then I was on the move again.

I very much wanted to go the entire length of the woods, and bottom, middle and top, but time was slipping away and the day of work was before me. And yet, I wasn’t quite ready to go back, so I went several more yards scanning fallen trees before heading up the hill. This part of the woods had a slightly different dynamic; there was something different in the trees and undergrowth. I had turned back before getting to the section that is populated more with junipers, white pine, and red cedar, however some of these trees were along the ridge here and I had to skirt around them.

It required a little less effort to reach the dryads I spotted, at least less ducking under branches. However, I found a dead tree with several on it but to cut them off I was standing precariously on a slope of loose dirt, near a deep ravine. My feet were sliding as I was cutting. I also had to be mindful of the fragile morels in my other bag. There was a large dryad (it weighted about 2 pounds) that required a lot of wiggling of the knife to free it from the tree. It didn’t take long for the dryad bag to feel heavy. I was thankful to be heading back toward the truck and slowly began to descend the hill, the bag of dryads seeming to pull me down. Running out of time, I made good progress on my way back, with the mushrooms feeling even heavier. Even so, I was reluctant to leave the woods and very much desired to spend the day in there.

At the bottom and on the edge, I stepped out of the magical woods into reality of cheese making and gardening. But before I left, I looked at one last dead tree and found a few more dryads to add to my bursting bag.