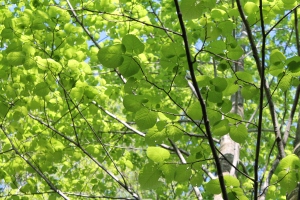 I stood underneath its canopy, looking up at the large, heart shaped leaves. I marveled at the sunlight shining through the leaves themselves, illuminating most the leaf but darkening some spots, an awesome effect that is only possible in the spring while leaves are young. The tree didn’t seem very old; it was smaller than others I remembered from childhood and the ones I worked under for my ecology class at Morris, MN, which were quite impressive in size. I reach out to touch the trunk of the tree, to have a connection with it. The bark seemed smoother than I was expecting. Standing there, staring up, I recalled a memory of an American basswood tree from childhood.

A bright summer afternoon I went to the woods to play with my five older siblings. The woods were situated on a hill slope (which inclined to the south and at the bottom was a dusty gravel road). A blend of hickory, elm, maple, oak, ash, and basswood filled the woods. There was a particular spot in these woods where we liked to play most often; four trees made a square and on the outside of this square sat a large, round, purplish pink boulder. This was where we normally played, but on this day, my brother and I were sent to the eastern edge to be “scouts”. (I can’t recall exactly what we were playing.) To get a better view (and to hide from whomever we were scouting for) we scooted up a basswood tree. I climbed up first. As I was inching out on my hands and knees on to a limb that had appeared sturdy and strong, I heard a loud snap. Suddenly the branch gave way underneath my weight and I sliced through the air in a nasty fall. Hitting the ground hard, knocking the wind out of me. The thick bed of leaves and moss had not been cushioned enough. Somewhat senseless I laid there on my back, looking up through the branches and beyond the thick canopy of leaves to the brilliant blue sky, feeling almost connected with the earth and sky. In the meantime, my brother scrambled out of the tree, ran as fast as he could through low branches, bushes, shrubs and fallen twigs, to tell our older siblings and bring them to where I lay on the hard ground. A short while later, that in my stunned state seemed like an eternity, I heard crunching of leaves under foot as they all came sprinting to my prone body. My enchanting view of the trees and their branches and the blur between green and blue as the leaves met the sky became blocked as my five siblings stood around me. I looked up at them wondering if they were going to help. According to my sister, Johanna, they were all afraid that I was dead. Memory fades at that point and I don’t remember if they helped me up eventually or if I finally got up myself. I also am not sure if after regaining my senses if we returned to our play or went to the house.