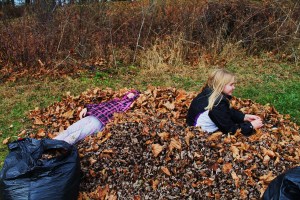 Wednesday, I began raking the maple leaves in the “grove” by the driveway. It wasn’t necessary to rake and bag the leaves, leaving them would add organic matter to the lawn, enriching it in a cost free manner. However, I desired to gather enough bags of leaves for mulching in the gardens next summer (I should have begun the project weeks ago). It had been many years since I raked leaves. The scrape of the rake across the hard ground, the rustle of the dried leaves jostling together, the strain of working muscles, and the distinctive smell of autumn leaves recalled childhood memories. The smell alone is nostalgic, bittersweet. 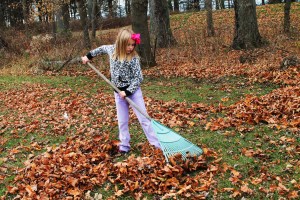 When we were kids growing up on our childhood farm, in the autumn, we’d have to rake leaves in the yard around the house. Raking leaves in itself isn’t necessarily an enjoyable task but done with siblings can be fun, playing while we work. We’d rake leaves into deep, wide piles in front of our old swing set. Then we’d swing for awhile, pumping our legs to climb higher and higher, getting to a reasonable height above the piles and jump off, landing softly into the nest of leaves. Immediately, we sprang up out and off the leaves to do it again and again. With each jump the piles would flatten a little, so we had to rake them again. The piles in front of the swing set were the last to be bagged, waiting as long as possible before they too had to go in bags, prolonging the fun of jumping off the swings into them for days, perhaps weeks.

On the other side of the house, we raked the leaves from our favorite climbing tree, a red maple. We’d make large piles and leap into them. Rolling around and laying still on comfortable bed of leaves, surrounded by them, reveling in them. The work is hard and exhausting but there is such delight in lying upon a pile of leaves, looking up into the autumn sky, taking in the earthy, woodsy smell of the leaves. The emotions and experience is indescribable yet enchanting. (If you have never played and lay in a pile of leaves, you are missing out and must give it a try). Though I know my siblings helped, specific memories are vague, it’s the leaves themselves that stick out in my memory.

Raking the leaves wasn’t the worse part of the job. (In fact, I don’t really mind raking leaves.) Stuffing the leaves into bags and having to rake a pile over and over again was the worse. This is where having many helping hands made the job easier. One person would hold the bag open while another would stuff it full of leaves. An older sibling, I remember Aleesha being the one, would hold the bag open while I, or other siblings, would grab armfuls of leaves. Then we’d close the bag and push down to let air out and compress the leaves so more could be stuffed into the bag. This bag stuffing would create a mess since not every leaf went in but several floated to the ground, making it necessary to re-rake the pile many times. When we had the leaves raked and every pile in bags, the bags would be stacked all around our old, draughty farm house (two or three tall) to provide extra insulation for winter. In the spring, the bags would be removed and the leaves used for either mulch or compost. After raking, filling bags, and a good amount of playing in the piles of leaves, we’d go in the house to warm up with hot chocolate or cider and perhaps a cookie.

As these memories floated around, I had the idea to have my nieces help me. By the time they arrived, I had a couple piles. Therese brought a leaf sweeper which was faster than raking and yet not designed as well as it could have been. It would sweep leaves into a bag of sorts that then had to be poured carefully into a bag. Elena and I filled bags, holding the bags while Therese dumped the leaves she had swept. We also stuffed leaves from the piles into bags. Alexis and Isabel raked a little, sort of began filling a bag, but mainly just played nearby. I was amused to watch Isabel rake; she had a look of determination about her. Of course, there was a lot of silliness going on. Isabel said, “Bethany, I have a magic cake, cucumber, pencil and carrot.” They sounded dangerous, but she assured me they were just pretend. Therese and Elena lay in a pile of leaves. Therese wanted to take a nap there. Being younger kids, the girls weren’t very fast so we didn’t get nearly as much done as I would have liked. But I enjoyed their company none the less and creating new memories.