Three days later, with temperatures around twenty below, I went skiing again in the tracks I made the week before, deciding I enjoyed both the skiing itself and the workout it provided. The subzero temperatures created ideal snow for skiing. Mom had instructed on the downhill and uphill, crouch lower when going downhill, lean forward more on the uphill and lift your feet a little. Even with following her instructions, I wasn’t keen on going downhill. The skis glided with ease and I was still sweating through my clothes. The sun gleamed on the snow, shadows made beautiful contrast.

Deer tracks ran alongside the ski tracks. As far out as one can go on the farm without going over the fence into the woods and wildlife area of the farm, paw prints told of a coyote walking in the tracks left by the skis. I marveled that a coyote had used the already made track in the snow, kicking myself for not bringing my camera (and the lighting was perfect too). Still turning awkwardly, I skied west across the southern boundary of the farm. I was beginning to lift my eyes from the skis to look out instead of down as I went along. Reaching the west boundary line, I turned north for awhile. Before reaching the gardens I turned east, going along in the field above the gardens. After skiing for slightly over half an hour, I turned around completely, somewhat retracing my course. Thinking many times over I should have brought my camera. Gliding on top the snow was thrilling. Cross – country skiing is both exhilarating and exhausting, I felt so alive and energized by it, but incredibly tired and worn out at the same time. I wasn’t quite back to the far shed when I became so thoroughly exhausted; it felt like it took every ounce of perseverance to get back to the house. I had been skiing for an hour and ten minutes. I decided that I wouldn’t ski for a full hour anymore, at least not for awhile, stick to half an hour to forty minutes. On Wednesday and Thursday, I skied twice each day for half an hour intervals, and Friday once for half an hour.

That Sunday afternoon, Jesse and I skied together on his farm. I was thankful we were both new at it so when we fell down we weren’t bothered by it. Skiing together was a bit different then skiing alone. Follow along behind or go side by side? Keeping pace? When we started out, I followed behind Jesse. Then he dropped behind me. Before long I was behind him again. We crossed the hill side by side, taking in the woods ahead and beside us. Our skiing was brief but delightful, we’d found yet another outdoor activity we could enjoy together.

Last week I skied Tuesday through Thursday and Saturday following about the same course, not always in my previous tracks though I tried to keep on them. Gaining more confidence and going at a moderate speed each time. Still not liking going down even the slightest of incline. (I finally got another sunny morning to take my camera along.) Each time, I was intrigued by animal tracks that intersect or run alongside mine. 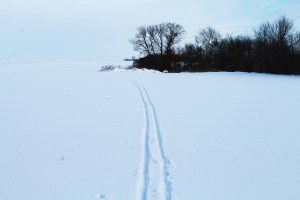 With the gusting wind both Tuesday and Wednesday, I didn’t get quite as hot or sweaty though it was considerably warmer than the week before. Skiing against the wind was difficult, grueling, making my eyes water and my nose drip, requiring more effort from my arms and legs. When I turned around to retrace my course back to the house my tracks had completely disappeared in some places, covered by blowing and drifting snow, and in less than ten minutes. The wind pushed me back across the hill, at times it was too much aid. I was very thankful it hadn’t been breezy the previous week. The warmer temperatures created softer, wetter snow, skiing conditions deteriorated. Thursday, I fell down when going down the slope by the corner of the fence. Going across the hill, I tottered a few times but was able to catch myself with the poles. When I turned to go back, half way through I fell backwards, one ski underneath me. Getting up was tricky. With the gusting winds through Friday evening, the snow was very hard and crusty Saturday morning. In the places where my skis had disappeared under the snow, I found it was easier to make new tracks then go through. There was no more skiing after that until new snow came.

Tuesday’s snow storm created good skiing conditions again. I was eager to go out. The driveway was easy going, but around the northeast corner of the far shed was slow. The depth of the snow made it difficult, I found myself doing more stepping than gliding through it. On top of the hill and across it was for the most part smooth gliding. My turning is becoming more fluid and graceful, less awkward and overlapping the ends of the skis. I can cover twice the distance skiing than walking. I’m not whizzing by so fast that I can’t enjoy the wintery landscape around me, however. I can take in the patterns the wind designs in the snow, the ripples like sand on a beach. Observe any animal tracks; I didn’t see any this morning. Halting on the top of the hill, before continuing to the southern fence, I can look out at the valley below, marveling at the majestic snow covered trees, the dark green of pines contrasting against the fresh white snow. Listen to bird song. Watch swirling snow. Perhaps by next year I’ll have the courage to go in the woods.