Around 9:00am, Larry and I left his place for the sand prairie, the Kellogg – Weaver Dunes. We drove along highway 84, noting red-tail hawks. I observed the prairie on either side of us. Larry decided we would walk onto the dunes from the north, so we turned off 84, drove through West Newton to Half Moon Landing.

As we were driving through West Newton, Larry pointed to rows of pine between the road and prairie, “We need to take those out, but the neighbors are going a little cuckoo. So it will have to be done gradually.”

Driving around Half Moon’s looping parking lot to turn around, Larry observed, “Hmm, there’s nobody here fishing today,” a little surprised at the empty parking lot.

As we drove, I told Larry what I hoped to accomplish with this project, how I planned to lay it out. He gave ideas and suggestions, “Your main focus and story should be the history of European settlement and how that has impacted this place.” But that my story should also include species that makes this place so ecologically interesting and important – like the herp fauna (reptiles and amphibians). Of the natural history of this place, what do I write about that best communicates the uniqueness of this place and why it should be saved? Which flora and fauna are most important to write about? Mammal fauna are most known and liked – so the focus should be on herps, insects and spiders. (I can’t write about it all, especially not in great detail, it would take a life time.) What history would be most interesting for readers?

Between Half Moon Landing and West Newton, we parked the truck to embark on our trek across the sand dunes. A small channel,  a stream, ran under the road where we parked. Before embarking, we observed the stream below the truck. Most of it wasn’t frozen and flowed freely. Larry pointed out raccoon tracks in the snow, “Raccoons are on the move; beginning courtship.” Here the channel flowed through a woodlot, trees fairly dense on either side of it. On the north side of the road, we were looking upstream. Our adventure didn’t lay there, however, but to the south. (Though I would have loved to explore in those trees but it was private property and not my primary focus.)

Not lingering long on the north side, we crossed the road, just above the small channel. Larry had brought his two black labs, Jake and Hank with us, they were also eager to explore and wandered ahead of us. We were on Fish and Wildlife Service land once we crossed the road; a sign with a square Canada goose staked the boundary, leaning from years in soil that shifts with the freeze –thaw cycle. There were lots of oak trees. We went in just above and to the west of the channel.

“This is in transition from Mississippi backwaters to woodland. A few river birches in here. The transition is very interesting,” explained Larry.

Walking past the river birch, I noted the bark peeling back, creating a unique texture to the trunk. Pausing by a bigger tree (not a river birch), I said, “That’s a cool looking tree.” Larry looked at it and continued walking. There were a few cedars too. Deer tracks and scats snaked through the trees. Snow crunched underfoot. Dogs ran ahead, noses busy at work. Larry led the way, not following a straight path but meandering around the trees, pushing past branches, turning a little to walk by the channel –look at the water. A steep hill rose to our right, speckled with trees. Larry paused to study raccoon tracks, “Raccoons came to the water, maybe for a drink.” I came up beside him to look at the tracks, too, and to take in the channel. Around some ice, the water flowed steadily; a soothing, bubbling sound. We stood there for a few minutes, taking in the water meandering around the hill, through the woodland. “Beautiful, isn’t it?” Larry asked, marveling at the scene.

We turned around, facing the hill, to continue our trek. “We’ll hike up this hill to the prairie,” said Larry. Walking past two signs, facing away from each other, he said, “TNC meets Fish and Wildlife.”

The hill was steep, climbing it was effort, and I was winded soon after beginning the climb. Hank walked slowly in front of me, slowing my pace and making the climb more difficult. However, I was encouraged that Larry also sounded winded. Jake, the older dog, trotted alongside Larry, seeming to be unhindered by the steepness of the climb. Small scrubby plants grabbed at us as we pushed by, one hitting me in the eye and across the nose. Though it stung, I said nothing and continued up the hill (I’ve been in the woods enough that a slap of a branch across my face isn’t going to slow me down). Larry paused near the top of the hill, I came up alongside him and did the same. We looked back on the channel, “just beautiful isn’t it?” Larry asked again. “Map turtles like it back in there,” he explained, referring to the winding channel, going around the hill. It would be fun and I hope to see a few sometime. Larry threw a stick down the hill; Hank looked in the direction of the stick, then back at Larry, seeming to say, “You don’t mean I have to go back down that hill do you?” 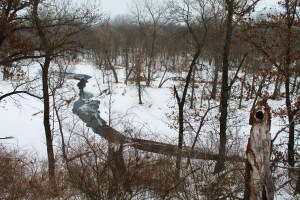 We continued up the rest of the hill. Trees, mostly oaks, dotted the hillside. Many were small scrubby black oak saplings. A charred tree, blackened from a prescribed burn, caught my attention. Fire is necessary in this ecosystem to keep the forest from creeping in on the prairie and for some prairie plants to reproduce.

Again we halted, taking a look at the black oak trees. Larry explained, “We’re trying to thin these out, lower the density. So we burn them. Lots of root stock though – have to treat the stumps. Otherwise, we get these small scrubby things in here. See those nice big oaks by themselves over there? That’s more what we want.”

“So oak savannah instead of oak forest?” 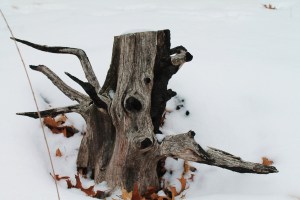 “Right. More open.” He broke a few branches of a black oak. The main tree is dead, but the roots sent up new shoots. “We cut down the red cedars too – their stumps die, so we don’t have to treat those.” A charred cedar stump caught my eye, the texture and color scheme of the bark and the charred streak, the arrangement of the limbs, and the contrast against the white snow made it eye appealing. We were on the sand prairie now. Dunes rose and fell, tiny hills to mount and stride down.

We walked downhill. Dried prairie plants stuck up above the snow, adding texture to the landscape. Even dead and dried, the intricate design of the plants was exquisite, aesthetically pleasing. Larry bent over, scooped up a dried seed head of big dotted mint and put it under my rose, “Smell the mint.” The strong, minty smell was delicious, reminding me of mint tea.

I gazed out over the dunes, rolling mounds, stippled with dried plants above the snow, individual cedars here and there, with a line of pines in the distance. It’s a different kind of beauty from a stream winding through a deciduous forest, but still quite lovely. The sky was heavily overcast; it had been foggy when I drove down to Larry’s. The thick cloud cover made for terrible photography conditions but, of course, I took photos anyway. I marveled at how vast the sand dune prairie appeared. The rolling sand dunes seem almost random –where did they come from? What are they doing here? – Not other worldly, but in the wrong place. I noticed animal tracks in the snow here and there but didn’t look closely enough to identify them. 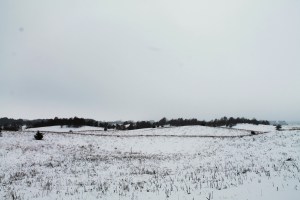 I paused by a clump of taller, slender, amber grass, “Is this little bluestem?”

Larry walked over to where I stood, “Yep, that’s little bluestem. It comes in well. But what we’re seeing here looks different than when we do a restoration. Not replicating this but restoring a prairie – starting over – the prairie looks different as it ages.”