Canoeing along the wall of wild rice, we approached the spot where there had been an ice ridge when we walked down the channel in January. The Wisconsin bluffs were ahead of us, Goose Lake stretched out between, filled with waterfowl. The wild clamor of tundra swans became louder as we neared the lake, as did the honking of Canada geese. Various ducks here and there jibber-jabbered all at once. Coots bobbed in the water just ahead, where we had crossed over the ice ridges. They were a large black mass sitting on top of the water. They were the loudest of all the birds, sounding like wood instruments rubbed together with precision for the most intriguing sound. Larry again stopped paddling so we could just sit there to marvel at the sight and sounds of so many flocks of waterfowl. And marvel we did, we were enthralled.

The air boat came roaring up from the south end of the lake, further out from us. Loud and obnoxious, it dimmed the music of the waterfowl, even the coots that were floating fairly close to us. Several flocks were put in the air; they circled about the lake squawking their complaints. Larry swore again. “These birds are trying to feed to gain energy to continue migrating and to reproduce – those guys are out messing with that.” The growl of the engine messed with the harmony and connectedness with the place. We observed the birds take flight; we had front row seats of the coots. With lots of splashing, they ran on top the water to take off. It was lovely to watch and listen to, the spray of water behind them as they ran and then left the water. The boat was further away now, just a low hum, the birds further up and across the lake were still being disturbed and taking to the air.

“See the cluster of white birds over there? Those are tundra swans.”

“Wow! – I can hear them.” A few minutes later four flew over head. – Graceful, elegant, and pretty. (Larry had said they were a sexy bird with ancient lineage.) They seemed like royalty with their grace and majesty, appearing refined. I was dazzled by them, mesmerized. Another group flew above us on our left, put in the air by the air boat. Sixteen swans, large, white bodies gliding across the sky. I watched in awe as they passed. My heart leaping with excitement, that would have been enough but there was still more majestic displays coming.

Larry drew my attention away from the sky, “See the flock of white birds skimming over the water, to our right? Those are pelicans.”

“Really? Cool!” I had wanted to see pelicans up close and take great photos of them but all the pelicans I had seen in the past year were so far away any photos I took weren’t very clear. This was indeed a very precious gift. I sat poised with my camera, watching them through my long lens. An amazing, breathtaking experience that left me awestruck, filled with wonder at the extravagant beauty of nature and so humbled and thankful to be given the opportunity to witness it. This was a special gift to uplift my heart. 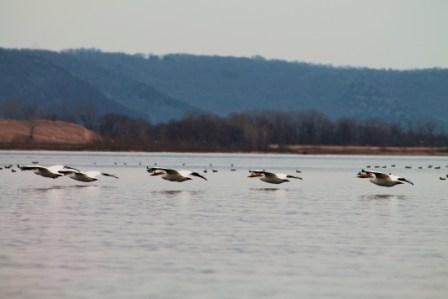 Not only was I able to observe the pelicans flying in, but I was able to take pictures too. I was elated. Saying thank you over and over again in my head, thanking God who knew this would absolutely delight me, not just in the moment but for a long time after as I gazed at the photos I couldn’t believe I took. Was He laughing as He watched me gaze at those large, incredible birds? Delighting in my delight? I think he was indeed. They came closer, flying just above the water surface. Black-winged tips spread out, then crooked as they glided. There were at least eight. Sometimes they flew almost in a line. When they began getting closer, I had to peer through the wild rice to see them. Then they were right in front of me, though I was still viewing them filtered through the wild rice. Beautiful. A perfect shot, right in front of my camera. They dropped even lower, almost skipping across the water’s surface, which mirrored their oblong bodies.

Their white and black feathers contrasting perfectly, very pleasing and eye catching; they were radiant. I thoroughly enjoyed watching them, captured the moment both with my camera and my heart, where it be treasured always. I sat in amazement, watching the pelicans glide over the much smaller coots, widgeon, bufflehead, canvas backs, golden eyes, and green-winged teals bobbing  in the water. We watched them begin to fade and land in the water ahead, far across the lake. I looked back to our right, the direction the pelicans had come, waterfowl dotted the water surface, a grand bluff sat on the edge. I was so amazed and thankful for the pelicans flying so close.

Instead of continuing to follow our earlier route across the ice, out on to the lake to the woodlot on the bank, Larry turned the canoe around, back up the channel. “We’ll head back; I want to poke around on the other side of the bridge a little bit.” 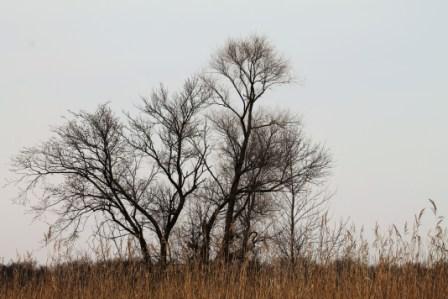 A small cluster of trees, now on our right, towered above the wild rice, “What are those trees?” I asked Larry.

“A black willow, an ash, and I’m pretty sure an elm.” I marveled at the beauty of the twisting branches of the black willow.

We continued along, following our route down. Though we were going up stream, Larry was able to paddle with ease, mostly just steering the canoe. There wasn’t a need for me to help paddle, and although I would have been happy to and indeed it felt a little strange not to, I was still enjoying the freedom to take photos. I switched between my long and short lens often, needing both to capture this place (the short lens to capture the landscape, the long lens for the birds). I was still awed by the beauty of this place – water, rushes, rice, trees, bluffs, birds, reflections – and desired to capture it with my camera (and later, words). I enjoyed being connected, plugged in to this place, feeling its energy and spirit soar through me – refreshing and healing. (This place has captured my heart.) It was certainly coming alive and busy – so much for the senses to absorb (wild calls of swans, coots, and ducks, buzz of insects – flowering trees).

Though we passed the same markers going up as we did going down, it was still just as beautiful, exciting, and awe-inspiring as it had been going down. The landscape, especially the trees reflecting in the water still captivated me. Still marveled at the tall wild rice, the austere, drilled snag. Still curious and wondered about the muskrat lodges. The ripples from a creature poking above the surface and then disappearing, still disappointed that I missed something and yet also thrilling something was there. The magic feeling while passing through the beaver dam again. The fallen snag, crown in the water was so low and the vegetation so thick we couldn’t paddle. We were very thankful for the high water that provided easy canoeing on this trip.