Canoeing Alongside Geese (Part I)

Larry and I went canoeing again; we put in at the bridge on 84 around 6:45 am. Instead of going up McCarthy Lake, this time we went down Schmoker’s channel. Larry parked in the small gravel parking area; he backed the truck in toward the water to unload the canoe. Larry paused before unloading the canoe. Facing the water, He said, “I think there was a beaver over there.” We waited a few moments looking out over the water, watching for the beaver, but it didn’t resurface. We unloaded the canoe, and then Larry pulled the truck forward a little bit and parked it. Then we stood on the bank with the canoe; we started to put it in when we realized it was facing the wrong direction so we pulled it out again and turned it so it was heading downstream. I enjoyed watching Larry maneuver the canoe; he was so good at it, his movements so graceful. Larry held the canoe in place, “Alright, Queen of Sheba, step in,” he teased. 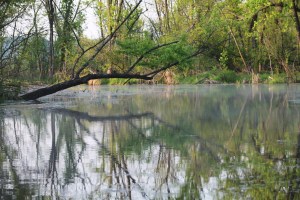 Playing along, I replied, “more like the Queen of the Mississippi,” as I stepped carefully into the bow of the canoe. Once I was situated in the seat, Larry handed the paddle to me. Then he got into the canoe and sat down. And then we were off. I helped paddle the canoe under the bridge. As we came out the other side, Larry said, “I can paddle so your hands are at the ready.” I enjoy paddling, contributing, but I also enjoyed being able to just take pictures and soak it all in.

It was a beautiful day, though a little chilly; there had been some frost over night. The temperature was a little below forty degrees. Mist rose off the water adding to the beauty – it had a mystical feeling to it. There was an abundance of life, so much happening. Red wing black birds filled the air with their singing. A small bird, either a sparrow or king bird sat perched on a small branch in the water. I was amazed at how different it looked compared to March. Trees were just starting to bud in March, now they’re dressed in dazzling green leaves. The aquatic vegetation had all been dried a brownish gold and now it’s had come alive in as dark green fronds poking above the water.

We were paddling along at a nice, slow, easy pace – enjoying being on the water. I could feel my muscles relaxing as we went along. With good water clarity, we’d peer into the water, Larry commented, “A lot of vegetation here.”There was curly pond weed, coon tail, and wild rice. The tangle of vegetation and the curious shapes of the coon tail made it seem like it was a whole other world down there. Sometimes it seemed like we were gliding on top of the vegetation instead of water.

The channel was a busy place: birds, fish, turtles moving beneath the surface, insects floating around, and beaver scent mounds. Some of the scent mounds we could barely see. Geese up ahead were carrying on, upset by our intrusion. Then I caught a glimpse of a large bird flying on our right, I thought at first maybe it was a heron or crane but Larry said, “Egret.” Unfortunately, by the time I spotted the bird, it was behind the trees so I didn’t get a good look at it. Maple, oak, and willows lined the banks, I reveled in their beauty, branches extending out over the water with the mist rising off the water. It had a peaceful, calming effect. I kept a look out for the beaver lodge I knew was around there but didn’t see it. We saw a few more scent mounds. A family of geese walked along on the bank; at first I thought they were turkeys but with a better look through the camera, realized they were definitely geese. It was nice to see a family of geese, since prior to that we hadn’t seen any goslings.

I saw a little mammal swimming, probably a muskrat very near the right side of the canoe. I pointed it out to Larry and quickly took a few photos of it. Larry didn’t actually identify it. Its cute little nose stuck up in the air. It had small dark eyes, a brown furry body. It didn’t seem to be too alarmed by our presence. (Looking at the photos, it was a muskrat.) We slowly curved first to the left and then to the right following the deeper part of the channel. 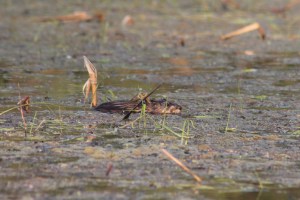 We passed the spot where we saw all of the otter scat; I wish to see the actual animal. Again I reveled in the trees, so lovely – some overhanging the water and was mesmerized by their reflections in the water. I also enjoyed the beauty of the bluff in the distance and the sound of this place. The channel bent to the right again and then back left. Larry spotted a king fisher; he said it got something. I didn’t see it.

We went around another bend. The muskrat lodges which stuck out in March were harder to spot, hidden among the vegetation. While we were still in the bend, we saw the spot we climbed up on to the log out of the water, back in October (2015). It was fun to recognize the landmarks, especially since they looked so different now with the new growth. I scanned the edges of the vegetation to our left, hoping to see an aquatic mammal. As we went along, there were lots of bubbles in the water where the fish came up and went down again. We could see lots of little minnows in the water too. 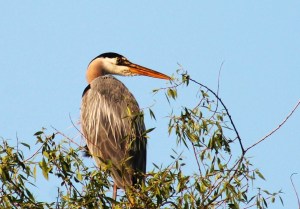 Larry called my attention, “on the right, on the tree, way at the top of the tree.” I looked and sure enough, just sitting there at the top, a perfect great blue heron. I was awed by how close we were and he wasn’t the least bit concerned about our presence. I took several photos of it as we approached. Larry turned the canoe so we were facing it and called out, making animal noises at first trying to get it to turn its head  a little bit to look at us. The heron still seemed unconcerned, alarmed or bothered. Larry said, “Hey, look at us.” It finally turned its head a little bit but wasn’t alarmed and didn’t fly off. A few moments later, Larry turned the canoe back to head down the channel.