The water all around us was dotted with green pickerel leaves. The point was to our left now, perpendicular to that is another peninsula of sorts ahead of us. That peninsula had only a handful of trees; it rather seemed like an island of dried wild rice plants beginning to green at the base.  Something was sticking up out of the water before it. Larry and I noticed it almost simultaneously.

I thought it was a bird – perhaps a great blue heron. It was not close enough for me to see it well so I looked at it through my long lens – it was indeed a great blue heron. Elated, I kept my eyes on it as we drew closer. As we continued to creep closer, I took several photos of it. The large bird stood on a mound, back turned to us, head erect. I took my eye off it for a moment to take in the corner of the two peninsulas which was tree filled with a wide buffer of thick wild rice plants, greening with new plants, between the trees and open water. The great blue heron was close to the corner, wild rice, and trees towering above it. It had moved forward a little bit, no longer holding its head up high, but had lowered its head and neck so now it was almost parallel to the water.

It lifted its head again and walked to the western edge of its mound and then turned around and began walking the other direction. My attention was again momentarily stolen away from the heron, following the peninsula out as it tapered off into nothing more than small patches of vegetation barely sticking out above the water. I marveled at the vast lake and the bluffs cradling us in all directions. Then I turned my attention back to the corner of the peninsulas. (I had switched back to the shorter lens to get an idea of the vastness.) Growing among the pickerel weed, yellow water lilies were blooming.

Larry was still paddling the canoe closer to the blue heron, inching us forward slowly. Suddenly, it flew off the mound to the right of us (east) as we continued to get a little closer. Then it turned back to the west before landing on a narrow strip of dead vegetation. It faced our direction for a moment. Did it see us? Larry drew my attention away from the heron for a moment. “There’s a bunch of coot and mallards.” The black duck-like birds stood and sat along the water’s edge on our left, basking in the morning sun, a perfect place for a gathering. The mallard was swimming in the corner of the peninsulas, between the coot and the heron.

The great blue heron commanded my attention again with its activity. Of course, it was easy for me to be enthralled by such a majestic bird. It was walking around in the water, moving its head slowly – perhaps hunting. I marveled at its incredibly long legs which enable it to stand in the water to hunt. It walked deliberately, like it was sneaking or stalking – thinking out each step. Larry continued to glide the canoe closer and closer. He enjoyed watching it too, I think – a magnificent bird, walking around on those long legs, moving cautiously. Larry said, “Look at all the fish around him.” It had its head near the water, turned to the side a little – dipped its beak in the water. Lifted his head up and shook it a little then went back down. “Is he fishing? Does he catch fish that easily?”  I asked.

Larry replied, “You know, I see some around him, could be trying to get something.” We kept watching as we continued to draw a little closer. Then we drew just a little too close, penetrating the comfort zone of the heron. It flew a little bit, barely in the air, just skimming the water. We hadn’t disturbed it too much because it lighted in the water only a short distance away. Larry said, “He has a comfort zone and we just got a tad too close.” We continued to watch it for awhile longer.

We kept going along the “peninsula” perpendicular to the first peninsula we came around, heading eastward.  We came to the spot where we saw the large flock of coots, in March, and pelicans. Then we rounded that spot, a point of vegetation, and then entered the channel again. As we were entering it, Larry said, “This is the last time we shall venture forth this way in the fall.” – referring to our canoeing trip last year in October. We went past the same willow tree, and the other trees clustered close together that we had passed in March. It was fun seeing the wetland dressed finely in green for late spring and summer. I enjoyed the singing red-wing black birds as we glided along. 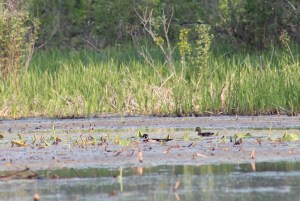 The beavers were constructing a dam. It looked like the construction was just getting underway – the branches and mud were in the process of being put together and built up.  We were able to go through it without getting out of the canoe. Working together, Larry and I pushed the canoe over it. While we were still on the other side of the dam, I saw wood ducks swimming up ahead and to our right. At first, I thought maybe they were geese. Then I saw a goose on a mound – that was a goose.Then I thought I saw a little bit of red the one’s head – it was a pair of wood ducks – red flashing from the head of the drake. Past the dam, Larry steered us closer to the geese on the mound. He said, “They’re nesting. Probably sitting on eggs – I hate to disturb them.” He tried to cautiously scoot around them, but sadly, they still flew, across another dam and up the channel. Since they flew off, Larry paddled the canoe up close to the mound. There was indeed a nest constructed on top of the mound made from dead aquatic vegetation. Eggs were nestled inside. “There are eggs in there!”

Larry instructed, “Stand up so you can see the eggs better.” After I stood up he then asked, “How many eggs?” 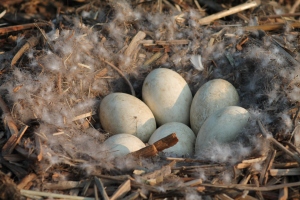 “Six!” I replied. The nest was large and lined with white down. The large white eggs with a little bit of gray on them were elegant, simply beautiful. Peering into the goose nest at the eggs was an incredible experience. To be granted this rare peek upon wild geese that were not habituated to humans was an awesome gift, a treasure. It was thrilling! We didn’t stay very long; we wanted the parents to come back. 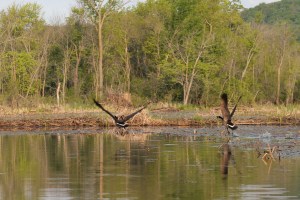 The second beaver dam stretched across the channel just ahead of us. It was just so beautiful, stunning to see. It was not conspicuous, shouting, “Hey, I’m a beaver dam.” And it didn’t interrupt the nature around it. Canoeing over the top of this more complete dam was not an option. Larry glided the canoe into it, and then instructed me to step out on to the dam. Larry then joined me on the dam. He said, “This would be a good spot to sit and watch creatures cross the top.” We looked in the mud to see who’s frequently crossed, heart shaped deer tracks were the most visible, Larry saw raccoon tracks too. Of course, one would see beavers as they’re working on the dam, though you’d have to sit very still and patiently to see one. It was interesting to see the water was at a higher elevation above the dam.

And it was really cool to see how it had been constructed; tree branches of various sizes held together by mud and woven with dead reeds. It was amazing to stand on the beaver dam in the middle of the channel; I felt even more connected to the place and was awed by the sturdiness of the dam. We pulled the canoe forward over the top of the dam and back in the water. I stepped back into the canoe first and walked to the bow, with a little more grace and I wiggled the canoe a little less.