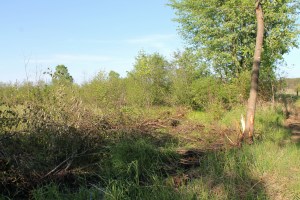 This evening, I went to the Weaver Dunes on my own, at about 5:00 pm and stayed until 7:00 pm. Going at that time of day, the only creatures out and about, besides people driving by on the road, were insects and ticks (I found four on me!) so there wasn’t much to see. I went back to the area Larry and I explored on April 8 when the wind changed our canoeing plans; south of Pritchard’s road on an old field driveway blocked with a gate and a Wildlife Area sign. I walked through the gap in the gates and past the dead tree. I sat down to write in the shade of the red cedar, not far from the stately snag. This was where grassland met woodland. A beetle scurried about in the sand. I noticed a dead bumblebee lying in the sand not far from the busy beetle. I may have sat there for almost an hour before a tick climbing on my arm changed my mind about sitting on the ground. So I stood up and followed the driveway into the trees. It looked totally different. Someone had cut down several trees, leaving nasty gashes in the landscape and ruining the effects of the tree tunnel that I had so enjoyed in April. 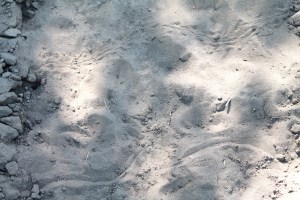 I observed turtle tracks right next to snake tracks in the sand. I enjoyed the cattail unraveling, puffy and hairy. A dead animal, beyond recognition lay on the drive about halfway through the former tree tunnel. I only looked at it for a moment before I continued walking. The drive opened up into the field/prairie. Part of the field was worked, nothing but sand.  I took in the prairie and the bluffs – marveled at the scale and reveled in the beauty of the amber-colored little blue stem. I continued to follow our April path, turning to my right; trees were cut down along here too, quite the mess. Some prairie plants were flowering. Where the trees on my right fall away creating an oxbow, I stopped and turned around. 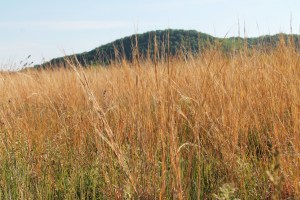 Back in what had been the tree tunnel, I took a better look at the remains of the dead animal; wondering what it had been. It wasn’t very big. As in April, I took in the water on either side of the driveway in the tunnel and admired the trees and dried vegetation. I marveled at the snag again one last time before leaving, back through the gate.

I drove down the road further to see the pond where I observed mergansers in earlier this spring. The waterfowl were gone but the pond was still quite lovely to look at. I stopped briefly to admire a red ant and some flowers and take in the dunes before I was on the move again. I headed back the way I came. Not far along the highway, I pulled off on to a low maintenance road, narrower than most driveways. It was a bit bumpy but I wanted to check out the prairie by the windmill which Larry had shown me earlier. I parked near the windmill and got out to walk around. Parts of the surrounding prairie were blackened by a prescribed burn done recently. I didn’t linger long there since it was already getting late. Of course, I had to stop on the bridge to take a few photos and enjoyed the new leaves. I left the sand prairie with hopes of returning soon. 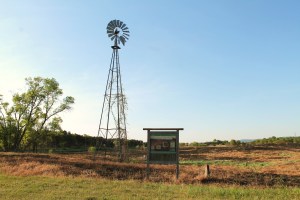