Another muskrat lodge rose up above the marsh many yards away on our left, as we continued our trek down the channel. Another channel or pool could just barely be seen beyond it. I took in the beauty of the morass of rushes and cattails, random trees standing above the marsh and the bluffs that bordered it on the west. The channel ahead of us curved southeast, disappearing behind the bulrushes. I observed muskrat lodges a distance away from the channel, here and there. Hopefully many of them were occupied. Then on our left, east side, a muskrat lodge sat on the edge of the channel. I paused to take a look at it. A big pile of rushes and other pieces of tangled vegetation, small sticks and mud built against a log. Was there a muskrat or two snuggled inside that mound, all cozy warm, waiting out winter? Larry had continued walking, I sped walked to catch up to him.

He halted for me to catch up and to show me a path through the rushes. “A boat of some sort pushed its way through here, making a path.” It was incredible that the boat’s path was still so clearly visible. They were probably duck hunting. It almost seemed odd that the vegetation didn’t fill back in removing the path.

Larry pressed onward, I followed behind. The channel bent sharply westward again. On the east side of the bend, a tall beaver lodge loomed up above the river bulrush. It didn’t go outward like many of the other beaver lodges I’ve seen in this area but upward. Larry estimated it was twelve feet tall. While Hank and Larry went over to check out the lodge, I took the opportunity to look at the marsh all around, looking first southwest where the channel again bends sharply to the southeast, bluffs ahead and only a few trees; west, a line of trees block the view of the bluffs beyond, the trees are thicker; northwest, bluffs go on and on far to the north, the marsh stretches on and on, with a rim of trees far in the distance; northeast, marsh and thick woods not so far away. Larry carefully climbed up the lodge. I walked closer to it and then stooped down to look at the food cache of branches; some of the ends were freshly gnawed on. 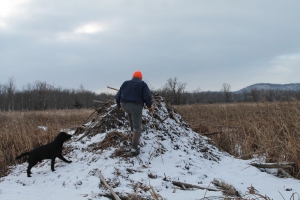 From the top of the lodge, Larry said, “This is a good view. Come on up. Get a different perspective.” So, careful to follow Larry’s foot prints around and over the food cache, I approached the lodge. It seemed almost strange to be climbing on a beaver lodge and yet so very thrilling. The structure is incredibly well built and sturdy. As I came close to the top, Larry bent down and reached out his hand to help me up the last little bit. “How about the view?” Larry asked. The extra twelve feet above the marsh did provide a better vantage point for viewing it.

“It is better.” I replied, turning to take it in. I didn’t turn all the way about, I felt like if I moved too much I would be blown right off the lodge, the wind was blowing so fiercely. The view was beautiful and provided a better feel for just how big the McCarthy scientific and natural area is. Was there a family of beavers in the lodge below us? – Mom, dad, a couple of yearlings and a few on the way? The thought was exhilarating. As always, we didn’t linger long. Larry climbed down the way we came and half way down turned back to me with hand extended. I took hold of his hand and let him help me down. (I’m a climber, I probably would have been fine on my own but appreciated the thoughtful gesture.)

As he walked back around the food cache to the channel, Larry said, “You followed my footsteps, that’s always good to do.” (Walking on ice can be dangerous so following someone who knows how to check the quality of the ice is a smart thing to do.)

We continued along the channel, going around the bend. Larry pointed out mink tracks in the snow wandering through the rushes. Following the tracks, we came to a hole in the ice that had filmed over with a thin layer of ice. Larry poked his stick into it, breaking the ice. There were a few different tracks around it. A little further ahead and the channel turned abruptly and became wider, less defined, and more overgrown with clumps of river bulrushes, which Larry said were a sedge. Here there was a lot of thin ice and open water. Hank went plunging and crashing into it. Larry and I halted. This was all the further we were going to go. After a few moments we turned and followed our course back. By then, I was so cold the dripping of my nose had grown worse as did the watering of my eyes.

When we got back to the point where we’d seen a lot of beaver gnawed trees and where the channel ran and wound closer to the trees, we left the channel for the trees.

Larry paused to look at a tree. It seemed to have been attacked with gashes here and there. “Butternut canker. It could still survive. The butternut is now an endangered species.”

I’m not too familiar with butternut trees, so it was like meeting a new friend – though sweet it was also bitter knowing this tree may not live much longer, that this species may not be around much longer either. It was a beautiful tree even though damaged by the canker.

We were now headed northeast, further into the trees, on our right was a large alcove nestled among the trees, it looked much the same as the marsh. Larry explained that it varies how much water is back in there from year to year but it is wet.

A tree, small in diameter, but tall had been rubbed quite furiously. The bark around the edges of the rub was hanging down in shredded strips. Larry joked, “Someone didn’t like that tree.” A buck, probably quite recently used this tree to try to get rid of his antlers. We walked by a tree that had been felled by a beaver but not hauled away. The gnawed areas were spotted with a black fungus. Nearby, a beaver had begun on another tree but only got past the outer layer of bark before giving up. A beautiful, tall, very straight tree had a vine running up it, like a snake, but even more fascinating was the vine had grown into the tree or the tree had grown into the vine.

Larry said, “There’s a lot of ash trees here, mostly ash trees. If the emerald ash borer ever gets here, it’s not going to be good.” I hope the emerald ash borer doesn’t make it here. We were ducking under and around tree branches, following well traveled deer trails. Now that we were no longer out in the wind, I quickly warmed up and even became hot. My body was weary from the walk but my spirit and soul were thoroughly enjoying it. 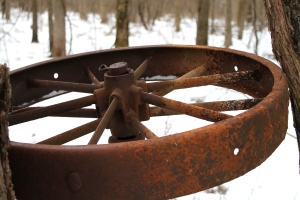 We came upon an iron wheel wedged between a couple of trees, on closer look it was two wheels. Larry joked, “We should tell Gene he left his running gear out here.” Although it’s not ideal for it to be sitting in the woods, it was a fascinating find; a piece of history that brought up questions. What had it belonged to? How old was it? What sort of life had it seen? How had it come to this resting place, forgotten in the woods? The wheel was a lovely piece of iron work, engaging to the eye. We walked onward, across a little stream meandering through the woods – perhaps the same one we walked across on the start of our walk. Then past another butternut tree, Larry said, “Butternut canker. But it looks like this one will live.”

Larry said, “As we gain elevation, we start to see more trees like basswood. But a lot of ash, especially where they get their feet wet.” We had begun to gain elevation, so gradual at first I barely noticed but then we were going uphill a little more. We turned more northward and soon were walking along the small creek we’d crossed at the start. We came out of the trees and were back on the prairie. As we pulled out of the parking lot, Larry said, “I thought they were going to stop planting this with sunflowers, corn, and sorghum and restore it to prairie.” The temperature had dropped three degrees in the past hour, while we were out walking. The sun was now shining.

We crossed highway 61 on to a gravel road. The road was actually just Thelma’s driveway. We left Hank in the truck while we went in the house to chat with Thelma. (I had been there in October with Larry to meet Thelma but he had to reintroduce me.) We were greeted warmly by Bo, Thelma’s brother, a dog, a cat and Thelma herself. She is a sweet lady, so full of love, as we began to talk it seemed like we’d already known each other well. The three of them chatted about fishing and the West Newton Landing, and its need for some upkeep, perhaps regular citizens could take care of it, until Bo had to leave. Then Larry explained my interest in the area and its history. Thelma began to tell us about her family’s relationship to the land, farmers first but once the chores were done they’d go hunting and fishing. She said she can remember her first time fishing with her dad. She would make him a sandwich and fill a canteen of sorts with coffee and tuck them into his coat every time he went out. – It was a sort of ritual. She described duck hunting and the way things were back then. Her dad was out hunting when her brothers were born. She described the boats they used. Fishing poles made of willow branches. She said the ritual of it and coming together as a family, spending time out in nature was what it was about – any animals caught was just a bonus, but the animals kept their family well feed, especially in the depression years. The tradition and ritual of hunting as a time to spend together and enjoy nature first and foremost, and not taking too much is something Thelma felt was important to pass on to her children. She said this was the most beautiful place and that she had fallen in love with it. Also, she talked about the importance of not harvesting an excessive amount of animals – you only need a few. I could have sat and listened to her stories for hours. She suggested we take a drive, and the memories would flow. Both Larry and I enjoyed her stories and were amazed at her memory and looked forward to hearing more.