We turned more westward into the tangle of vegetation and trees. We pushed into the line of trees, branches sliding along our coats. We ducked under branches and pushed others aside, stepping over low or fallen branches. We came to an old rusted fence, just three strands of barbed wire, crossed and tangled around the trees. Larry said, “I’m still amazed that they grazed this!” He stepped over the wires, I took in the fence. It was a little too high for me to be comfortable stepping over especially with all my layers on. I decided to scoot under it instead. I too am amazed that this was grazed – it seemed like it would have been a lot of hassle to fetch the cows. There may have been less water here at the time or more channelized but it was still a wetland. 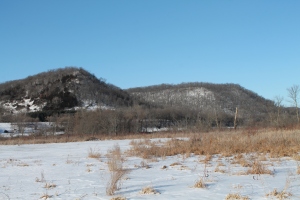 I asked, “Which plant is that?” Larry pointed it out to me, a tall grass like plant. He said they are working on controlling (eradicating) it – it is an invasive species to this area.

“Yeah. Should we go check it out?” Larry asked.

“Yes!” I replied. A bluff towered above it, both of similar shape. Trees gathered behind the beaver lodge. We saw a few muskrat houses, far off from us. We paused by some indistinct tracks in the snow. Larry thought they could be muskrat tracks. A muskrat doesn’t last very long out on top of the snow; they become easy prey. We closed the distance to the beaver lodge quite quickly. It was good sized indeed. Now standing close beside it the scale between it and the bluff didn’t seem so immense – but that was only because of the perspective while standing next to the lodge, it was incomparably small, not even a mere fraction of the bluff behind. We checked out the ice near the lodge with small pieces of sticks scattered here and there in it. A cache of sticks, mostly under the ice and snow, stretched out many feet away from the lodge. Before we’d headed out on our walkabout, I told Larry tomorrow was suppose to get up to forty degrees, which we both thought was far too warm. So as we took in the beaver lodge Larry said, “The beaver will probably take advantage of the warm temperatures and venture out to its wood cache.” I imagined a beaver popping up out of the water chewing on a stick then slipping back into the tunnel and up into the lodge for a few meals worth of sticks with it.

We head southwestward, making our way back to the truck. Across the snow-covered ice, vegetation on its fringes, past a couple of muskrat houses, we walked onward. I turned to look back at the beaver lodge; we’d already put some distance between us. It was almost hidden from view with all the vegetation; I could only see the top of it. Then we left the open ice for the tangle of bulrushes and cattails, turning ever so slightly more westward, until we were headed west, the railroad tracks and highway ahead and above us. We paused at a muskrat house that had been drilled. Larry stuck his pole inside it. Sometimes they escape and then walk around on top of the ice for awhile but there they became easy prey. This one was nestled among alders, the same alders we skirted past at the beginning of our walk. Around the alders, we paused to take a look at the pool of water with a thin layer of clear ice now on our right. Larry was wondering what animals took advantage of the open water, only a few days before, but there weren’t any clues.

We began the steep climb up the embankment. Larry pointed out the rusted T-posts; all that remained of a fence. Again we were amazed they grazed this area. Larry and Hank walked on ahead of me, across the railroad tracks. I paused for a moment on the track and looked toward where it soon disappeared around a bend along the trees. It is a curious feeling, standing on train tracks; I’m not sure how to describe it. You feel small; your part in history is very small. Though it has probably been rebuilt since, the track has been here for a hundred and forty six years. It’s a time warp, you step on it and time is absent, it could be 1880, 1930, or 2017. It spans the present and the past. A steam engine carrying logs from Minneapolis to the mills of Winona could come speeding around the bend at any moment, or be carrying livestock or grain. It could be stopping in Weaver to pick up crates of onions, melons, and squash. It is incredible how timeless train tracks feel. 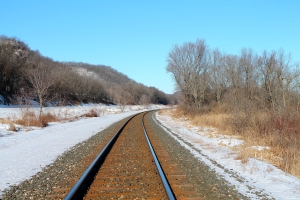 A little beyond the tracks, before the climb up the second embankment to the road, Larry halted. I stepped off the tracks and joined him. He pointed out wavy lines, miniature crevasses in the snow, “Mouse tunnels that were exposed when some of the snow melted,” he explained.

“Cool.” Then, keeping Hank close, we hiked up the steep embankment to the truck. I turned and looked back at the marsh stretched out before us. The view from above the marsh was spectacular. Larry pointed out some trees way off in the distance that if we had continued northeastward we would have come into, he said, “We would have gone into those trees if it wasn’t so cold.”

We went to Kellogg to the Town and Country Café to warm up with some delicious pie. After enjoying a slice of pie each, we left Kellogg on Highway 84 instead of 61. We turned down to West Newton. Larry told me they were going to add more sand to the area and rip up the prairie and start over – not the way he would go about it. We drove into the parking area for the West Newton Landing. The channel was flowing, moving quite quickly, taking ice chunks downstream – it was an incredible sight. Larry said it’s fun to canoe when the water is flowing and the ice is breaking up. I said it sounds like it, and I’d love to do it. Then we drove to Halfmoon Landing and then back to 84 and on to Larry’s.