Canoeing in the Fog 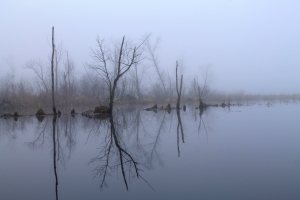 The fog was quite thick, but despite the foggy morning and the temperature around twenty eight degrees, Larry and I decided we’d take the canoe out. We thought the fog would burn off quickly since the sun was shining brightly but it didn’t burn off until 10:30 am or so. We put the canoe in on McCarthy just off the bridge around 8:00 am. We brought Hank with us. Larry paddled the canoe up McCarthy following our route from last fall. Ducks flew away as we drew near; Larry identified mallards, buffleheads, ring necks, northern shovelers and teal. Canada geese squawked noisily when we drew close to them. The fog was so thick we had very little visibility; we couldn’t see anything beyond the trees lining the water on either side. The trees themselves were nothing more than just faint pencil drawings. Though too foggy to take pictures of the birds (the camera wasn’t focusing) it was quite lovely and mystical. The fog isolated us from everything else, compounding the feeling of serenity canoeing brings. I enjoyed our solitude. The fog seemed to enhance the bird calls; since we couldn’t see them very well, my hearing stepped up a notch – maybe the fog was trapping in the sound. Larry spotted a kingfisher; I didn’t see it but only heard it. The beauty of the water and the trees in the fog was breathtaking, but my head and eyes began to hurt from the strain of trying to see through the fog.

As we drew closer to the trees they came more into focus. The still nude trees were reflected in the water, their reflections clearer than they. We passed the first island of trees. On our right was a tree gnawed on by a beaver. The rushes and cattails were golden, no fresh green plants. We glided along it; it was like a dream. We glided past the last island; I looked for muskrats as we passed. There were pairs of squawking Canada geese that I could just make out. As we neared they began squawking noisily, making quite the fuss. They didn’t fly away immediately but when they finally did Larry said, “Yes, go away. Good riddance.”

I saw a muskrat house tucked behind vegetation. Hopefully it was occupied by a rat. The water lily plants were just beginning to grow – bright green nubs sticking out of the mud at the bottom, the leaves starting to unfurl. Larry was a little surprised they were popping up already. Larry steered the canoe to a patch of vegetation near the northeast bank that stuck out into the water, where my foot went through the ice this past winter. He pushed the canoe into the vegetation, going over a log. He was looking for a particular muskrat lodge. At first he couldn’t see it; I looked around also, trying to find it. But then Larry spotted it and steered the canoe toward it. We got a little hung up so I had to help steer the canoe and pull it forward. When we were close enough to the lodge, Larry asked me to step out of the canoe and stand on a clump of vegetation. I hesitantly stood up and stepped out on the clump. It shifted a little under my feet; I think perhaps there was a log under it. It was kind of unnerving and yet amazing to be standing on a log and plants in the water. Once I was out of the canoe, Larry pushed it up along the lodge so he could pull out two stakes, each holding a trap. Larry and I were both glad they were empty. Larry was very upset, the trapper was relentless – a long string of swear words were uttered by Larry. He placed the traps into a bucket he had brought along for that purpose and placed it back in the canoe. Then he wiped off the stakes and laid them in the bottom of the canoe. The clump seemed to be moving even more under my feet, I was eager to return to the canoe though I enjoyed the experience. Larry stepped back in to the bow and walked back to his spot in the stern, then he backed up the canoe, pausing for me to step in the bow. I sat down and Larry continued backing up the canoe until we were out of the vegetation. We continued onward into the fog, going further up McCarthy. Logs and stumps stuck up out of the water. We could see the faint outlines of six geese near the vegetation on our left. They began squawking and carrying on but they didn’t fly away. I could hear the haunting call of a sandhill crane somewhere on the marsh. I admired the large stumps as we went past them – what grand trees must have stood upon them! Other than right by the bridge the water was extremely shallow, barely deep enough for the canoe. So we didn’t go much further before Larry said, “Bethany, we’re going to run out of water.” Shorty after he said those words, Larry turned the canoe around. I was sad to be turning around so quickly. 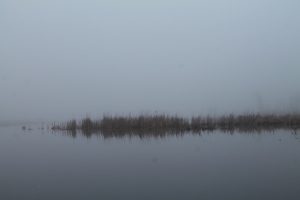 We didn’t return the same way, we took the other channel; it was deeper. The trees on our right seemed to rise out of nothing, the edge of the world – everything beyond shrouded in gray. I reveled in the beauty of the pencil drawn trees and their images mirrored in the channel. We seemed to be canoeing into nothingness as well – like we were sailing on the Dawn Treader, nearing the world’s edge. The pale yellow orb was also reflected in the water.

As the channel curved about, Larry said, “There’s either a beaver or muskrat swimming by the trees ahead of us. It looks like a muskrat.” It took a few moments for me to figure out where the muskrat was but once I spotted it I watched it until the small animal disappeared into the vegetation on our right. Since it was still foggy I didn’t bother to try photographing it but enjoyed watching it swim. We drew near to the bridge, I was quite chilled, my feet were just about numb, but I was not ready to be done. So I was very happy when Larry continued to paddle the canoe under the bridge.

The base of a tree on our right had been stripped of bark, grooved with teeth marks. We had entered beaver territory. There were so many beaver scent mounds! I admired the way a tree hung out over the water and the loveliness of its reflection. Last year the scent mounds were mostly near the bridge and there weren’t quite nearly as many. But as we continued down Schmoker’s they seemed to line the channel on either side. There were so many mounds one could almost imagine you could smell the castor as we passed, and perhaps we could. Larry joked, “This is a mound building tribe of beavers!” Indeed! Many trees had been chewed on by beavers. I was delighted to see the beaver signs and by the thought that one could be nearby.  As we passed the lodge, I hoped we’d see one but they didn’t make an appearance. I admired the trees along the bank to our left as we went down the channel. The fog was still thick – making it hard to pick out all the landmarks.

Soon we were near the first beaver dam. It was in need of some repair. A tree stood to the right side of the channel a few feet down from the dam. A top most branch leaned out over the water. Sitting on the branch, I could just make out the outline of a bald eagle; another faded pencil drawing. I watched it for a few moments as we drew near, a bit surprised the majestic bid didn’t fly away at our approach.

We’d come to the side channel Larry and I used last May to get out on Goose Lake. A bigger log lay across the opening this time. Suddenly I saw a mink swim across the mouth of the side channel my heart leapt at the sight of the small predator. I pointed it out to Larry.

“Yeah, I see it. A mink.” I was lost in watching it swim, such grace. I enjoyed seeing the mink. I kept my eyes on it until it disappeared into some vegetation only a moment later. Larry stopped paddling so we could linger there. He said, “It might come out again.” But after waiting quietly for a few minutes, it didn’t reappear. Larry skillfully turned the canoe around bumping into a submerged log. I was disappointed to be heading back already despite being chilled.

The fog didn’t seem to be quite as thick but there was still very little visibility – the world around us was still very much shrouded in gray. As we passed by the big beaver lodge, I again studied it carefully just in case a beaver was sitting there. Were the beavers hanging out in there? A whole family even? Even the nearby trees appeared hazy and faded in the fog. A state game refuge sign was in the middle of the channel, mostly submerged in the water. The bridge drew near, there appeared to be nothing beyond the bridge – it was completely gray. We went under the bridge and landed the canoe. Although I had been a bit disappointed the fog didn’t burn off while we were canoeing, it gave a new perspective to the marsh and channel – I experienced it in a new way; and of course it was very beautiful and had a mystical feel. Though nothing was green yet, spring had arrived to the marsh, the birds I could hear but couldn’t see sang of spring. The whole thing was quite enchanting.

As we left the marsh and prairie behind us, Larry and I both were looking forward to another outing.