Snowshoeing After A Blizzard of a Lifetime (Part II)

(Note: Read https://bethanybenike.com/2019/03/14/a-blizzard-of-a-lifetime-part-i/ before reading this blog, they go together.)

I was a bit lazy on Tuesday and Wednesday too, back at home I certainly could have snowshoed. However, it wasn’t until yesterday morning, Thursday that I finally went out to snowshoe. I’m glad I did! The snow was perfect! I went out again in the evening. This morning too. This time with my camera. Might as well enjoy the snow while it is here. 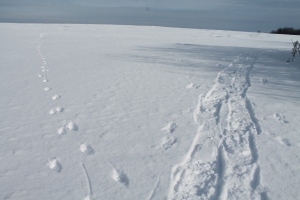 I stepped down off the wooden deck, stooped over to strap my feet into the snowshoes, pulled on my mittens and grabbed the poles. I was off. Across the driveway, up a steep and tall snow pile – glad of the aid the poles lent. How exciting, standing on top of the perhaps eight foot snow bank! I felt like I was on top of the world, queen of the hill – with a new perspective, providing an elevation in mood as well. Now, how do I get down and on to the other side? I looked for a less steep way down the backside of the snow bank. Ah, there, a little further to my right. A rapid decent down the snow pile, nearly a tumble but for the poles giving me balance. Despite the snowshoes, I sank in a bit. Another step though and I was walking on top of the snow. Along the path through the trees, I trotted. My pace was faster than it had been a week ago, hardly sinking in at all. Around last year’s pig fence. Around the west end of the greenhouses. Past the big garden, hard to tell where the edge of it was. I had prayed for snow, so I thanked God for his abundance as I trekked along the field. I marveled at the frost brushed plants that still stood above the snow, particularly the milkweed pods. I was amazed and delighted to be walking on top of the snow, only just sinking in – last week I was sinking down nearly a foot in some places and perhaps deeper in others. Snowshoeing is so refreshing and energizing. I was feeling better already; my spirits beginning to lift. The morning trek was a balm to my weary soul.

There’s so much to enjoy on a trek across the snow – tracks from critters, the curve of the sculptured snow drifts, the sparkle. At the first set of tracks, I dropped my poles and sank to one knee, took the lens cap off and switched on my camera. Getting it to focus on snow is tricky. The sun was behind some clouds so it wasn’t the best photo. These tracks were tiny, created by a small rodent – mouse or vole. Standing back up, a pole in each hand, I continued onward. Only a few paces away, I dramatically dropped back down on the snow, this time to photograph coyote tracks. It was a treat yesterday to see all the coyote tracks; my reasoning for taking my camera out with me this morning. A few feet further on and another set of small rodent tracks caught my attention, a bit different than the first set.  I prayed the cloud would move so I’d have better light for photography.

I’d been heading south. Coming upon the property line, I turned east, still keeping up a quick pace. There were several coyote tracks back here too, but I didn’t pause for them, hoping for better light. The property line in some places is just a row of vegetation, in others remnants of a fence can barely be seen above the snow, and then a few small trees, sparkling with their frost jewelry. Many yards eastward, I came to our woods, the property line turned south again, for a ways before turning east again, wrapping around the woods – I thought about meandering in them but didn’t want to take the time today. I continued onward, the woods on my right, a fence in much need of repair along its edge. Another turn, this time to the left, taking me in a northern direction, woods and fence still on my right.

Northward bound, the sun finally broke through the clouds, just in time for me to photograph coyote tracks crossing my tracks from yesterday. The coyote tracks were encouraging; I was glad to see them – these predators are much needed. The frost coating the trees glimmered and twinkled in the sunlight; it was rather quite dazzling. Nature was showing off her beauty, flaunting it. It was easy to be besotted with her. Yesterday’s trail led me up a slight incline and then another turn east. More coyote tracks. Splendid! I stepped over the nearly buried fence, leaving the cultivated part of our farm for the wild part. I paused to stand in awe of the snow on the slope of the big hill I stood upon. Myriads of tracks filled the slope. I felt like I stood on a mini glacier. Here, I indulged my love for photography and nature, trying to capture the stunning drifts and the colossal amount of snow. Such beauty. Snow adorns the winter landscape, creating loveliness from dreariness. I turned and went back up the slope; I’d only gone down a few feet, stepped back over the fence wire and continued onward. Soon I had to turn again to my left, heading north yet again. I admired the trees and the tracks in the snow, and the sparkle. I noticed a coyote scent post, comically right next to the top of a rusted fence post – this made me smile. 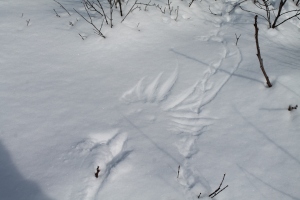 Around another bend, a right turn, and back to heading east. So many rabbit tracks among the trees in this spot. A few feet further along and there were more coyote tracks; but no sign of them catching the rabbits. Again the fence line turned. I stepped gingerly over the fence in front of me. The tracks and drift the center of my attention. Along the edge of the drift, on the hill slope, the tracks seemed to have packed down a spot in the snow. Onward, the drift plunged over the side of the hill, a glacier engulfing the sumac forest. I plunged down the steep, firm drift, stepping over sumac reaching above the snow as if they desired to be rescued. A few twigs snapped off. The tracks were so interesting. Wait those tracks, further down the slope, weren’t coyote or rabbit tracks but bird tracks. Too small to be turkey, I postulated they were pheasant tracks. I turned to follow them up the slope on my right, with my eyes. Wow! There were wing prints in the snow, a bird snow angel. I dropped my poles and lunged up the slope clumsily to get a closer look. Incredible! I walked back to the poles, picked them up and continued down the slope a few steps more, then turned to my right, west, around some larger, less buried sumac. I paused to enjoy the birds. Chickadees and sparrows fluttered about, happily singing as if spring is around the corner. Somewhere a cardinal whistled. A woodpecker tapped a tree. It was a lovely morning.

I turned right once more, toward the daunting slope; I had to go back up to the top of the hill. (I was nowhere near the bottom, still above the middle.) But there was adventure and excitement in the prospect, the mini glacier was more vertical than horizontal. The teeth on the bottom of the snowshoe proved their worth as they bit into the side of the gigantic drift, giving me much needed traction. Indeed I felt like I was traversing a glacier, scaling a wall of snow. I stepped over the fence, climbed just a little further and then I was back at the top. I wasn’t quite ready to turn around just yet so I walked along the fence line north for several more yards. My legs were beginning to ache. I was hot and sweaty. Time to turn around. I zigzagged back the way I came, following in my tracks. Not lingering to take photos, I kept up a pretty good pace, although a few times I slowed as the ache and exhaustion of my legs continued to mount. My physical energy had sapped away by drudging across so much snow, almost a two mile trek by the time I returned to the house. My mental energy, however, had been boosted.

I’m content. The snow can be done falling now until December. But it is snowing as I write this, and it is so beautiful, so peaceful, and so quiet.

‘If you truly love nature, you will find beauty everywhere.’ – Vincent Van Gogh