Larry expertly maneuvered the canoe around the swaths of vegetation. The deep, gravelly purr continued. There again was a lull in the conversation, both of us content to listen to the marsh, so alive with spring activity – purring leopard frogs, a red-winged blackbird; a group of swans sounding like trumpet players rehearsing somewhere out of sight. And again the drone of another airplane interrupts, which I tried very hard not to pay attention to, trying to focus on the marsh. Hank whimpered and whined. But still the frogs kept going. Some individuals’ noise sounded more like contented grunts, less like purring. Others sounded almost like animated movie frogs ‘croaking’, although more like ‘creaking’ than ‘croaking’ – like the sound of trees creaking in the wind. Each singer a male eager to mate; in the height of breeding season, males will attempt amplexus with other males or anything else floating nearby including aluminum cans. The droning airplane continued on and Hank whined, but even so I reveled in the incredible choir of the frogs; the purring was so prevalent I could feel it, not just hear it, as if it was a part of my being. I enjoyed the feeling, oneness with the amphibian singers.

We had been heading west, across a wide stretch of water until we hit a wall of vegetation, a low lying wall, but not penetrable by canoe. Larry smoothly turned the canoe south, the wall on our right.

“That a muskrat, you suppose?” There was movement in the rushes.

“You see something moving around in there?”

“Uhhuh.” Hank whined again. Water gurgled as the paddle sliced through it.

“We should be seeing them,” he lamented. Larry had begun turning the canoe westward again, around a bend, taking us into another channel, narrower than the last.

“Are there map turtles?”

“Ah, there probably wouldn’t be any maps in here. They’re out on the Miss.”

I heard the wild piping of sandhill cranes but couldn’t see any.

“There’s a painted turtle. Ooo, nice sized one too.”

“I think there’s a turtle right there. Maybe. Or it could just be a clump of dirt. Right by those…hmm, hard to see…yep, definitely a turtle! Hmm, that one might have been a Blanding’s, maybe.” I could only make out the very top, rounded part of the turtle’s shell among the rushes, not enough to identify it.

“Might have been. It looked bigger than a painted…” gesturing with my hands, “it was about this big.”

“Could be, I think it had a dome. It seemed too big for a painted turtle. And it definitely had a smooth shell.” After a moment of quiet, “Oh, there are some turtles!” Pause. “Those are painted turtles.” Geese honked, flying overhead. “One of my nieces, when she was about three – we’d found a painted turtle wandering on the farm and told her it was a painted turtle – she asked who painted it?” We both laughed.

An airplane flew over again. A red-winged blackbird sang. Suddenly, I wasn’t hearing leopard frogs as we went further along the channel. “Conk-la-ree,” another redwing blackbird or perhaps the same one called out. A kingbird chattered. Again the redwing blackbird called. Hank groaned or sighed or maybe it was a “hmph”. The airplane faded. Water bumped against the side of the canoe, a relaxing sound. The landscape was so dreary – cattails dried and brown, the grass and rushes a faded gold, trees bare skeletons. I saw a blackbird perched in the upper branches of a small tree; the red on his wing the only bright color around.

Larry turned the canoe right, into a tiny opening in the tangled cattails, barely wider than the canoe. “A bufflehead ahead of you,” he pointed out.

“Where? Oh, now I see it.” A black duck with a couple patches of white swam in a ‘pond’ area, walled off by vegetation. “Conk-la-ree,” rang out the red-winged blackbird. The vegetation against the canoe made a horrible screeching noise as we went through the small waterway. There was another bufflehead, close by to the first; a pair. I hadn’t seen the male right away. He had more white; a side profile looked like a black streak running from his face, down his throat, neck to along his back. Side and belly white and a large patch on the back of his head. They swam around each other, unconcerned by our presence. I was surprised our noisy entrance into the pond area didn’t raise more alarm with them. I heard a lone goose squawking somewhere off in the distance, out of sight, its squawking continued nonstop for a couple of minutes. A beautiful female gadwall floated on the water, across the pond, near the far side, corner. She was a lovely gray. A chorus of leopard frogs performed in the pond area; once again their purring could be felt within me not just a sound in my ears. I relished the reverberations throughout my body, in the deepest part of my being. A red-winged blackbird wanted to be heard too. As we drifted on the water enjoying the sights and sounds – a landscape waiting to green, ducks swimming, frogs purring, goose squawking, red-winged blackbirds singing – Larry got Hank to re-situate, “Hank, come here. Sit. Sit. Stay. Good boy.” An airplane again intruded upon the sound track of the marsh, droning on for a few minutes. Trees lined the other side of the pond area. Cattails and rushes a tangled mass at the trees’ feet, separating them and the water. I spotted two sandhill cranes flying to the west of us. Though it was just a glimpse, I was excited to see them. I took one more look at the gadwall, wishing she was closer for me to observe better. I suppose Larry didn’t want to get too close to the ducks, this way we wouldn’t disturb them. The water licked against the canoe. Amid all the other sounds I heard the twittering of song birds, most likely chipping sparrows. Larry dipped his paddle back into the water, effortlessly turning us around. Hank whimpered, a long drawn out whimper. The canoe scraped against the vegetation once again, although this time it didn’t create the horrible high pitched screeching, just a lower -pitch scrape. We were through the narrow waterway, back on the ‘channel’. The sound of leopard frogs disappeared entirely back in the channel. Red-winged blackbirds’ song continued, as did the twittering.

Ahead a painted turtle perched on a small part of a snag protruding out of the water. One back leg stretched out behind. Neck stretched out and up, face to the sky, enjoying the warmth of the sun, conducting a prayer of thanks for the sun. As we drew near, the shy turtle slipped back into the water. The airplane finally receded. Now we were quite close to Highway 84, so it was replaced by a car driving by, momentarily drowning out the vocal birds but mercifully was gone quickly.

“Aww, there’s a little paint. Cute.” It slid into the water and vanished. I observed a chopped down tree, the lumberjack a beaver. The severed part came to an end, like the tip of a crayon. A fence post stood next to it. Another tree had a bald spot, it grew horizontally along or in the water, it may actually have been dead. The rounded bald spot, exposed bone, was a knob.

“Ring- necks to your right.” Larry pointed out. I had been so captured by the landscape around us, we’d entered into a more wooded area, that I almost didn’t see the birds right in front of us. 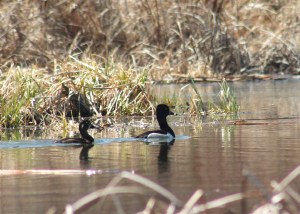 “Right? Oh yeah!” A male and female were enjoying a morning swim. She was nearly a solid color and appeared smaller. He led the way, head held high, proud. His head, neck, breast and back black; side gray, belly white. Despite their names, I couldn’t make out the ring around their necks. (There had been a few bends in the channel to get to this point.) He had a white crescent on his face, just ahead of his mostly black beak with a spot of white towards the tip. They were lovely. Looking further ahead, I saw two more; another male for sure but the other one could have been either. (Looking at the photos later, I wonder if that other one was a ring-necked duck, its markings almost look more like a teal.) At first they swam away, almost leisurely, until we drew too close, then they ran on the water, webbed feet sent up sprays of water, and they lifted off, flying out of sight. I only had a minute to observe them and photograph them.