More Than Just A Winter Walk

Winter arrived late; December 31 was one of the first days that it truly felt like winter. Before going about my daily activities on the farm, I went for a short walk to soak in the brisk winter air. Yes, I went out into the cold to soak it in, to enjoy the crispness of the air. In fact it was a near perfect winter day. The sun was shining, the breeze slight instead of gusting and the temperature somewhere near twenty degrees Fahrenheit. Morning walks had faded out sometime in June as a daily routine, life had pulled the rug right out from under my feet; I dove into my work more than necessary in response not really living but going back to survivor mood. My walks came to a halt, writing was put on the back burner (at times removed completely), and my photography as an art waned.

As a whole 2015 was not a good year, filled with too many goodbyes; a beloved dog in January, a dear friend in June, and my sister’s mother in-law in December (and the struggles of a premature nephew born at the end of November), the intervals between those goodbyes just hit me while writing this. Enough time passing to begin to gain some footing when the next struck. Looking back now, it seems amazingly significant my first morning walk occurred on the very last day of 2015, by no design of mine; though I can’t quite explain the significance of it. People often make New Year resolutions, changes desired for the New Year that very few people keep to. I have thought about what I’d like to have happen this year, what to change, what to improve on etc but the best I can do is hope that I will really come alive again this year, truly live; laugh more, walk more, write more, enjoy more, live more and find a small joy each day in which to delight in and be thankful for.

I set out for my walk as the sun was still rising over the winter landscape. The path led me through the yard and building site, past the sheds, following along the fence, on my left, for the older calves. I paused briefly to take in the stunning effects of the morning sun on the snow and calves. The morning was begging to be enjoyed as I continued to follow the fence as it turned a corner then another. Then along the pasture fence for the cows, rounding the far shed.

My attention was soon aroused by tracks in the snow. I wondered at their story. How fresh were they? What were the animals about when they walked through that spot? Some tracks even the animal itself was in question. What animal made those tracks? Of course the angle of the sun casting almost a golden hue on everything, was stunning, breathtaking even. I admired it, awestruck. My heart swelled with that beauty, it was a gift from the Creator.

Some tracks there was no mistaking. A deer had wandered through, across my path some hours before. It appeared to be a large buck, but I’m not skilled in reading tracks. There was no doubt the track’s maker was an elegant white tailed deer though. After a moment’s pause, I continued on my walk. The sun had felt warm.

I soon came to another pen for calves on my right; the pasture fence was still on my left. There the animal traffic had been quite busy. There was a confusion of tracks going under the fence of the pen. The most prominent of them were rabbit tracks. Far too many rabbit tracks criss-cross our yard and farm, I wonder if there are much for predators around.

Again I paused. So much beauty lay before me. The snow had drifted, creating a perfect looking mound, smoothed by the wind. And again, the angle of the sun was magical. The snow drift had perfect contrast. I couldn’t resist taking a photo. (The lighting was a gift in itself, perfect for photography!) I scanned the drift for a shallow spot, and plunged forward. 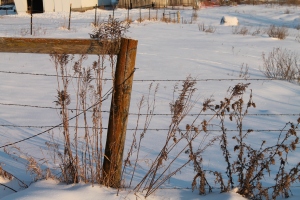 Rounding the corner of the fence, changing direction once again, I finally felt the breeze on my bare face. It stung at first but wasn’t strong enough to make the walk miserably cold, it simply felt like winter and was refreshing in a way. I took my time walking along, taking note of the vegetation near the fence. Most plants retain beauty long after they have died and dried into a brown stalk, one of my camera’s favorite winter subjects.

Clean, fresh snow has always been a joy. Animal tracks through it a marvel. In moments of reflection, I like to turn and look at my own tracks through the snow, how they stand out or mingle with other tracks. It’s fascinating to return on the same set of tracks the next day, observing animal tracks that cross over mine.

One more set of tracks caught my attention that morning. I hadn’t the slightest idea what caused them. Upon close examination it appeared a mouse had lain in the snow. Curious and fascinated I took a photo. (Later, Mom suggested wing tips.) I continued on a little further, not quite reaching the woods before I reluctantly turned around to head back in. I retraced my steps, the fence on my right. I felt refreshed and looked forward to the next morning walk.