Early this morning, Larry and I headed out on another canoeing adventure, around 6:50 am. We stopped the truck and unloaded the canoe by the bridge on highway 84 again. We were finally going to give McCarthy Lake another try. The morning was beautiful, a little cool (just above freezing), not a cloud in the sky and perfectly calm. Before unloading the canoe, we looked out over the lake, soaking it in; watching a pair of ducks bobbing on the water, feathers dark. Further up a pair of Canada geese swam. Near the pair, a male red wing black bird filled the morning air with song. I was awed by the beauty and opportunity to watch life unfold in front of me. Trees that had just started to leaf out a few weeks ago were completely leafed now. It was so bright and so green. The aquatic vegetation was finally starting to green and grow. It was breathtaking, stunning, simply lovely.

Larry said, “We’re going to head up McCarthy as far as we can go.” (Larry said the water level is down.) He placed the canoe in the water, bow pointed upstream. As always, I stepped in first. Once seated, Larry handed a paddle to me, pushed the canoe further out in the water, gingerly stepped into the canoe, sitting in the stern. As we shoved off, Larry said, “See the green vegetation starting to stand up out of the water? That’s wild rice.”

McCarthy appears to divide into two channels, a narrow one off to our left and a much wider one in front of us, with a couple small alcoves, like ponds to our right. The two channels are divided by an ‘island’ of trees and other vegetation. We continued straight ahead on the wider channel, overcome by the beauty of this place. The fine weather was an answer to prayer. We both started paddling; though I often set my paddle down to take a couple photos. The island of trees on our immediate left was very dense at first, a wall of trees. I marveled at their graceful forms, adding to the beauty and overall feeling of peacefulness. I reveled in the mirrored images in the water; the beaver dam was especially perfect. 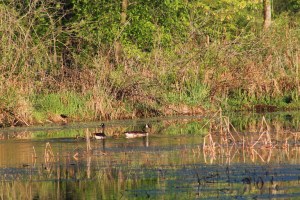 We weren’t able to see these goslings though the camera caught them.

Another pair of Canada geese squawked and honked ahead, to our left; the black, gray, white bird majestic in the morning light, large and elegant. We seemed to have intruded on their territory. A red wing black bird also had territory staked out near the pair of Canada geese, perched on some vegetation, reflected in the water – so beautiful. I enjoyed listening to his song; more than anything else, to me, that’s the sound of spring and prairie wetlands. The wall of trees continued on a little further then began to thin. A small, open area provided some space from an island to the next. Another distinctive, ancient, heart-stirring sound rang out over the marsh. My heart will always leap at the sound, filled with excitement and hope to see the magnificent birds that make the most wild of noises, a lonely trumpet echoing across the marsh; almost a step back in time. Sandhill cranes. I hoped and so desired to see one and photograph it. However, they could be hidden anywhere in the many acres of McCarthy or surrounding land.

Being out on the water was relaxing, a perfect way to start a day; just listening to the wild bird song. Larry said, “We’ll start to see turtles now; painted turtles.” I peered into the water; it was so clear. A whole other world existed beneath the water’s surface. In some places it looked like an evergreen forest, conifer trees here and there. I asked Larry what it was. He said it was a kind of algae. We went at a slow pace, just taking in all the beauty; geese honking and flying, the song of the red wing black bird, and we were still hearing the wild trumpeting of the sandhill cranes. The water was lovely and quiet. Quiet time out on the water is so healing and refreshing; I think my soul needs it; a time of worship, in expectation of God’s extravagance and love. What gift would I receive this time?

As we were just gliding along, Larry said, “To our left,” but didn’t immediately say what I should be seeing. I turned my head, scanning the water to our left. “Further left.” Pause. My eyes continued searching. “Do you see that?” A moment pause, then, “Sandhills.” I couldn’t see them; I wasn’t even sure where to look. 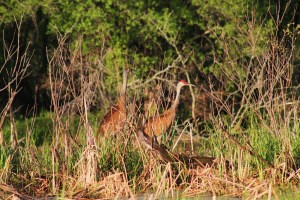 “On your left. See those dead trees there?”

“Oooh, I see them!” I exclaimed, filled with excitement – elated by the sighting. Larry turned the canoe a little towards them. I lifted my camera, with the long lens zoomed in. Their rusty feathers hid them well among the vegetation despite their size and bright red heads. They were exquisite – magnificent, ancient nobility. My heart soared! There they were! Just standing there, not flying away immediately. However, Larry said,

“They’re getting nervous.” I took a few photos before they really started to get nervous. Then they were on the move; walking at first, before taking to the air. Larry steered the canoe so the bow was following the flight of the cranes. I took several photos hoping at least a couple would turn out. It had been a beautiful moment. I hadn’t really expected to see sandhills, though their call filled the marsh; I desired, hoped and longed to see them. It was an amazing gift, which filled me with thankfulness. Another experience to treasure. The cranes flew through the trees and were soon out of sight. Their call continuing on, after they disappeared. Another red wing black bird sang, perched on vegetation below the flight path of the cranes.

A pair of Canada geese squawked and honked making all sorts of noise as we drew near. Trees loomed up behind them, on our left, up ahead. The trees grew close together, rising above the other vegetation and water. The patch of trees wasn’t very big, it soon opened up again. Aquatic vegetation was thick, appearing to grow in stripes. A male red wing black bird claimed his territory, sang to attract a mate. Bluffs in the distance cradled the marsh. A pair of geese swam in the open water beyond the first ‘row’ of vegetation, another ‘row’ behind them.  I enjoyed the mosaic of the marshland vegetation in its intricacy. These geese were also noisy, not happy with our intrusion on their territory. Did they have nests? We didn’t see any but it was nesting season, in fact, some goslings should have hatched already.

Though the birds were lovely, my attention shifted to the water’s surface ahead, to the left, and as we glided along, around us. Large, waxy, green leaves, not quite circular floated on the water’s surface, like a fairy tale, adding tranquility. “Are those..?” I began to ask.

“Yellow water lilies.” Larry supplied. They were quite lovely, story book lily pads that you’d expect to see a frog sitting upon. It was as if we were canoeing through an impressionist painting. And indeed we were. Perhaps handpicked by the Master himself for my delight. This was my cathedral, my place of worship.

My attention was continually fought over by the abundance of life and beauty here; reflections, mirrored images on the water’s surface, plants underwater, bent in the current, lily pads dotting the water. Teals floated near the bank on our right, tucked in close to the vegetation. Larry and I both saw them at the same time saying, “Teal,” almost simultaneously. Larry seems especially fond of teals, finding their coloration very appealing. I have come to enjoy them as well. Trees bordered the right bank, creating a wall, a barrier from the outside world, providing solitude in our own little world, one with the canoe a great medium for connecting to a marsh, quieter, far less disruptive, and able to traverse shallow water, puts you at the same level, moving at a slow enough pace to take it all in. The blue wing teals, with lots of splashing and spraying of water, flew away as we drew near. We encountered another pair of Canada geese, receiving the same reception as from the others and another red wing black bird.