After seeing the sandhills disappear, we passed the open area with the geese, and came to another island of trees. A snag hung out over the water, the end bent down into the water. Larry said, “A muskrat on your left.” I turned to look but wasn’t able to see it right away. Then I realized what I thought was a log was actually a mammal; dark brown, little ears, beady eyes, sitting in the water. It sat facing us. Carefully, I put down my paddle and lifted my camera to my face. Just as I was about to take a shot, it vanished beneath the water. “There he goes.” Larry commented. I was disappointed not to get the photo, but happy to have at least observed it for a few moments. Perhaps there will be another chance, if not today then another time. After seeing the muskrat, I left the paddling up to Larry; he didn’t need the help and I wanted to be ready with my camera. Although I love to help paddle, it was great to have my hands free. I marveled at the trees along the bank that had already leafed out. I took in the greening of the aquatic vegetation and the general beauty of the day.

Larry continued to paddle, slowly, just keeping us going the right direction. The trees on our left had dropped away. The marsh was open, the trees far in the distance across the vegetation-filled marsh. I observed small fish darting by in the water below us, “Lots of little fish,” I said. They were moving too fast for me to catch more than a glimpse of them. Sometimes they came to the surface only to dive seconds later, casting small ripples across the water.

“Most likely all are species of shiners spawning up here,” explained Larry. I enjoyed watching them dart about, tiny glints of silver, moving through the water. Larry said, “We’ll start to see painted turtles now, in pairs. Turtle love.” I gazed into the water, keeping a look out for turtles. Larry saw a couple. More geese squawked and honked as we drew near to them. Red wing black birds were still calling. I enjoyed the beauty of their mirrored image on the water’s surface.

The world beneath us quickly caught my attention again. “Do you see any turtles?” Larry asked.

“No.” I peered into the water intently, then, “I see one, I see one!” I exclaimed. I watched it swim for a moment before it disappeared. It kicked with its legs much like an elephant does when swimming. I was thrilled to see it. 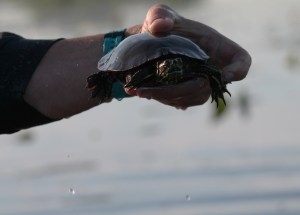 “Look to your left,” instructed Larry. I turned my head a little but didn’t see anything. “Further, further,” Larry instructed patiently, as I continued to search. “There’s a turtle.” I still didn’t see it. “Right next to you.” The canoe glided forward. I still didn’t see it. Larry reached down and picked up a painted turtle. Water dripped from it. I turned around to take a picture. Making the turtle talk, Larry said, “Hi, Bethany. Take my picture.” The turtle was looking at me, not so sure about the whole thing. Toes spread, claws extended, wondering why it wasn’t still swimming below the water’s surface. A beautiful, elegant creature, incredibly adapted for its life style. In a matter of moments, Larry gently returned the turtle to the water.

The line of trees on the left was a little closer again. We came upon another pair of Canada geese. I enjoyed watching the magnificent, large birds take flight, though sad to have disturbed them. Larry commented, “Goose territory – why aren’t we seeing any goslings? I wonder if the otters are just that efficient and that’s why we aren’t seeing any?” A muskrat lodge was nearly hidden in the cattails. I scanned the water around the lodge, hoping to see another muskrat but there weren’t any. 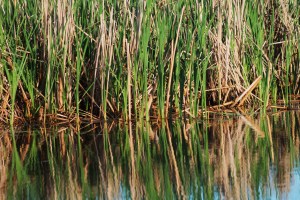 The sun was starting to get warm, I contemplated taking my jacket off but then a gentle northwest wind began to blow. I picked up the paddle and helped Larry, as we began to turn a little to our left, heading more west instead of north. The current had turned; we were continuing to follow it. Facing into the breeze was a bit cool, my eyes became a little watery, my nose a little runny.  I took in the greening cattails and lovely snags, barren, sticking up out of the water. I marveled at the geese and took in the beauty of the aquatic, green and brown plants reflecting in the water.

Our attention shifted to the world beneath the water’s surface. So many little fish swam about. Larry exclaimed, “There’s thousands!” Small, tiny little things came off the water. I wondered what it was; dust, some kind of pollen or something. Then I realized they were tiny insects, like a black fly or gnat.

Larry and I paddled against the wind and current, which was getting a little tricky. Larry said, “I was hoping we’d get as far as the beaver dam.” So we kept paddling.  The lake-like channel had narrowed considerably, a little more than twice the size of the canoe. The vegetation grew more thickly, clumps of bright green cattails and brown vegetation.

We stopped paddling a little bit to take in our surroundings. Bluffs loomed up ahead. Across the marsh, there appeared to be more vegetation then water. Canada geese were swimming some distance away. Trees rimmed the north bank, behind the geese. We watched the fish below us.

Larry said, “Man, the road traffic is loud today.” It was starting to drown out all else.

“Yeah, it seems a lot louder than the other times.”

“Wind out of the northwest, blowing the sound right to us.” It was unfortunate to have the loud highway noise, but it didn’t diminish my enjoyment of the overall experience. We sat there for a few minutes, talking briefly but mostly silent.

We started paddling again. A pile of branches stuck out of the water across our path. The canoe headed directly for it and got hung up on it. Larry said, “Push us off the branches.” So I pushed on the left side, muscles straining against the effort; the blade was set against the branches. Larry exchanged his paddle for the duck bill pole, aiding in pushing the canoe forward. Very slowly, the canoe inched forward with some creaking of the hull against the branches. We made it over, paddling a bit further. 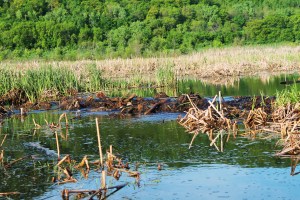 And then, there it was. The beaver dam, a little further ahead of us. It was tucked into the vegetation. Didn’t look like much, nothing grand, very small. Water poured over it like a waterfall. Though small, it was beautiful. I marveled at the ingenuity of the beavers. Larry instructed, “What we are seeing here is the affects of the Zumbro channel.” He stood up to take a better look at it. “If you look above the beaver dam, you’ll notice the difference. The water level is higher up there. Good spot for a dam. You see these bigger trees and stumps – old trees before locks and dams were put in. The locks and dams flooded the trees. Beavers moved in and went to work on the trees.” Larry sat back down. “Ok, now you stand up and take a good look at it. See how it’s higher on the left.” I carefully stood up, balancing my weight, taking it in. I was amazed. It certainly was a good spot for a beaver dam. From the higher vantage, I observed the dam to be longer than it had first appeared, some of it quite hidden by the vegetation. I was a little nervous about standing up in the canoe, I could feel the canoe teeter and totter a bit beneath me, so after having a good look around, and I sat back down.

I asked, “What are those green plants?” They had three leaves/fronds spread like a fan.

“Ah, so that’s how they look when they first start out.”

“Yeah, you see a shift in aquatic life bathed by warmth and nutrients, just take off, which is why these ecosystems are so prolific.