Larry and I pulled into the Weaver Landing at 8:15 am. Instead of going up McCarthy Lake or going down Schmoker’s channel, we canoed the Weaver Bottoms. Larry backed the truck up to the boat landing. With Larry in the bed of the truck, and me on the ground, we unloaded the canoe. While Larry was moving the truck to a parking space, I enjoyed the view of the Weaver Bottoms, so vast! The sunlight filtered through fluffy clouds, which were beautifully mirrored in the water. Green clusters of aquatic plants stuck up out of the water here and there. On my left, a maple tree’s branches hung out over and above the water. On my left, the trees covered the west bank too, some leaning out over the water. Across the water, far off in the distance, bluffs bordered the river. So blue, with the clouds keeping the sun from casting its full light, everything was a shade of blue. Clouds would shift, a little more sunlight, another color added to the world, plants, aquatic and terrestrial, and algae were green. A dragonfly was stuck in the vegetative and algal gunk on top of the water’s surface. I was fairly certain the large insect was dead. The glimpse of its tail, it looked like a dragon, not a fly, but a great beast of legend, fallen forever.

We put the canoe in the water; Larry held it in place as I stepped in. I sat down, then, simultaneously, Larry and I realized I was in the wrong spot. Oops. I stepped out again, walked to the front of the canoe and stepped in. As I sat down, I said, “Now this feels right.” Larry got in and we pushed off. Being later in the morning, there wouldn’t be much wildlife to observe. So this trip was about the plants rather than the animals.

We headed east into a large patch of vegetation. Larry said, “Lots of sagittaria, commonly called arrowhead because of the leaf shape.” It grew quite thickly right ahead of us; we plunged into the forest of sagittaria. It’s an important food for migrating swans. I was just about to ask Larry if the yellow lotus was blooming yet, I read the sight and scent is quite fantastic, when we turned ever so slightly to the right, going around a jut of trees, sticking out on our right – and wow! There was a large patch of blooming yellow lotus in all its breath-taking, stunning lovely splendor. Big and pale yellow – I had entered another dimension. The clouds broke up and scattered, the sun shone brightly on the large blossoms. Larry said, “We’ll go into them so you can get pictures.” I was awed. We glided past more sagittaria, I thought the leaves looked more like spades, the end of shovels rather than arrowheads; digging tools, sitting on the ends of their handles. Their reflections in the water appearing as green smudges. Up ahead there were blotches of purple throughout the green. Larry identified it, “pickerelweed.”

It was so relaxing to be in a canoe again and the aquatic plants in bloom added to my contentment. I loved taking in the reflections on the water’s surface – beautiful isn’t adequate to describe it. Priceless paintings can’t compare. Larry slowly turned the canoe southeast. A peninsula, covered in trees, called Montgomery point, stuck out ahead and to the right. Between us and the peninsula were large patches of pickerelweed and yellow lotus. The sun shone through yellow lotus leaves and glared off the water. I was fascinated by water droplets, sometimes more like puddles, on the leaves floating on the water’s surface. Again, I looked in awe at the vastness of the area. Larry wondered why some leaves floated on the water and why some were on stalks sticking up above the water a ways – figured it may have been for energy saving. 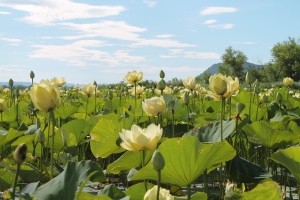 We finally reached the lotus patch; Larry pushed the canoe into it so we could be among them. We were in a wild flower meadow; a scene out of a story book. Some flowers hadn’t opened yet, only a very few had lost their pedals already. Being among the flowers, at their level was an amazing feeling – so thrilling. Larry said, “I want to get you up close so you can look in to the flower.”

We came upon a blossom I could look down into, Larry halted the canoe. It was fantastic. It looked unreal. The stamens were sea anemone waving in an ocean current, perhaps just as colorful too. The long filaments a bright, contrasting orange and the anthers on top white, creating an overall coloration pattern like candy corn. At first glance, the top of the stigma appears to be a circle. It is circular, yes, but bumps out instead of smooth, and appears perforated like the cover on a watering can spout. The perforations were bumped up. The stigma was as yellow as an egg yolk. The bottom, base of the petals, is an Easter yellow, soft, which gently fades into white about half way up. The petals are thinner and rectangular at the bottom, then rounded like a spoon but then come to a rounded point at the very top. The flower had an interesting design. Not a stereotypical “pretty” but a unique, individual kind of pretty. I loved it; it seemed to speak to something deep inside me. It was captivating.

Moving forward slowly, I took in another blossom from the side rather than straight down. It wasn’t open as far as the other – the petals weren’t spread out but upright, like a fancy champagne flute. Most of the blossoms were spread open. It had the look and texture of folded cloth napkins at a high class wedding. Floating through the lotus meadow thrilled me. The leaves and blossoms all seemed to be facing the sun. They swayed in the wind. I marveled at the shadows on the leaves of the blossoms cast by the sun. The big waxy leaves were marvelous. I had to touch a couple. At first, I couldn’t catch a whiff of their scent but when I did, I thought it was also quite incredible.

We halted again so I could take pictures and really take it all in. Larry instructed me to stand up to get a different perspective. I turned as I was photographing. When I took a picture of Larry, he said, “I’m a flower,” smiling, taking in the flowers. After a few minutes, Larry asked if I was ready to keep moving, I replied, “Yeah, I have plenty of photos.” I reveled in the beauty of the plants and reflections on the water’s surface. Larry wanted me to get a good look (and photo) of the sagittaria flower too. They’re far less showy. The blossoms are small, in whorls of three sitting on an erect stalk. Pretty pink lady bird beetles were mating on the vibrant green stalk. There were round, fuzzy, red brown balls wrapped around a sagittaria stalk, below the flower whorls. At the water’s surface was cool looking algae, yellow green in color, it looked soft and fluffy like cotton balls. Larry also mentioned that there is so much going on below the water’s surface, like coontail. 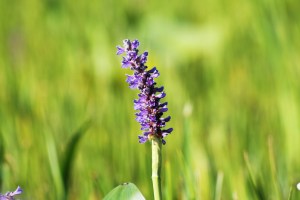 We were getting closer to the tree covered peninsula, going south. We came to a spot where the blooming pickerelweed added purple to the mosaic. The flowers grow on a tall spike. Individual blossoms are tube shaped. The tip of the spike bent slightly. The pickerelweed was like a field of prairie clover. So amazing! I was happy to have had the chance to be out on the water when so many aquatic plants were in bloom. I felt like a princess in an enchanting kingdom. Birds, swallows mostly, swooped down to the water surface all around us, though never getting very close to us. They were catching insects. We startled a female wood duck. Back among the lotus, I felt small but in a good way. This was definitely therapy and rest for a weary soul. The fields of the lotus petals were like a wedding gown. I studied the beauty of the water and a droplet on a leaf. Some of the leaves on the stalks sticking up out of the water have centers that seem collapsed inward, creating a nice little seat (or pocket) for a fairy to sit in. A plant under the water looked like grass. The water was so clear.