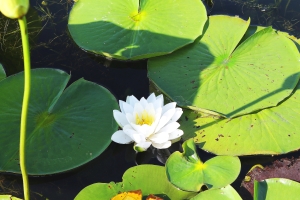 Further south, we saw a white water lily. So quintessential of story books and fairy tales, you’d expect to see a frog sitting on the pads. Smaller than the lotus, and not nearly as far out of the water, indeed some appear to be sitting on top of the water. 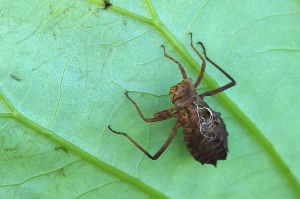 Moving along, I spotted the shed skin, called an exuvia, of a dragonfly nymph on the back of a lotus leaf. It looked alien. Only its large head, eyes and face resembled an adult dragonfly. The left behind exuvia looked like it could be alive; one would almost expect it to move. The abdomen looked plated, armored like a dragon hide. The thorax had a white string like object coming out of it, like a pull string. It was dark in color, not at all like the colorful adult that left it behind. Larry halted the canoe so that I could get a good look at the exuvia of the dragonfly nymph. After I had a good look at it, we continued on. 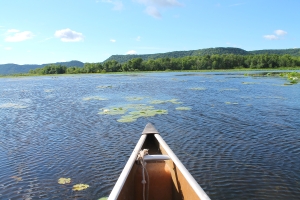 More water lilies dotted the water ahead – I just loved them! There was a cluster of an aquatic plant that looked like grass. The water ahead of us opened up with only small patches of lily pads here and there. A large forest of aquatic vegetation was off in the distance. The open water quivered in the wind and sparkled in the sunlight. The bluffs near and far felt comforting. A meadow of lotus plants stretch away to our right, we were no longer in them. 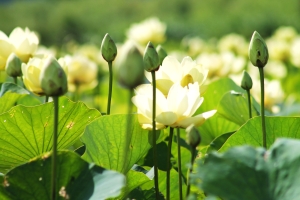 Passing water lilies along the way, we grew closer and closer to the lotus meadow and trees ahead. We went into this lotus patch too, again enjoying connecting with the amazing plants. At first, they grow rather thickly, but as we kept pressing on we came to a spot where they weren’t quite as thick, although there were still a lot of them. They were so beautiful and smelled so good. Some had lost their petals already. Larry commented, “They’ve dropped their petals, preparing for sexual activity. Like a woman taking of her clothes – naked.” I was just thinking of the very same imagery just before he said that. Only a few petals clung on, stepals dried and brown. 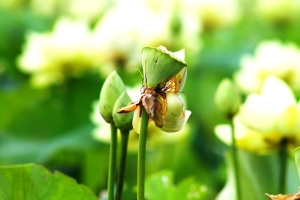 Continuing further, we left the lotus patch behind and began turning west, then northwest to make our way back, Larry said, “You’ll have to help paddle, the wind is too strong.” We paddled hard just to keep heading the right direction. Fighting the wind, it took us almost fifteen minutes to cross the open water. We’d traded the lotus patch for a sagittaria patch. Once we were out of the open and into the sagittaria, Larry said, “I can paddle now so you can take pictures.” Those plants were more slender and graceful. 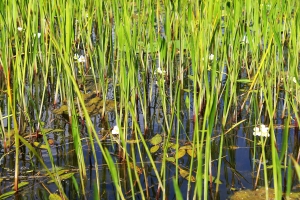 Before long, the sagittaria only patch became more diverse. A few lotus plants stuck up above the sagittaria. And white water lilies here and there were tucked down below, at the water’s surface. To our left was a stunning view, purple pickerelweed and yellow lotus blossoms intermingled. The beauty of the aquatic flower garden can’t really be explained in words. The shade of purple seemed other worldly. We pushed through the pickerelweed, pausing often for me to take photos, which I enjoyed. I was amazed by the beauty. Larry had wanted to get me close to look at the pickerelweed blossoms. Up close they looked more blue than purple. The blue flowers are in clusters on a spike. The blossoms appeared hairy, frizzy like hair coming undone. Up ahead, far off, slightly to the left, I could see the observation deck we’d stood on back in March, looking for migrating waterfowl.  How different the Weaver Bottoms looked then. 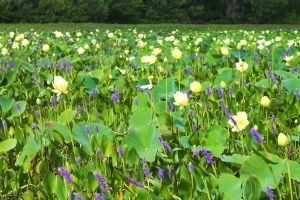 It’s mind-boggling to think how colorless this area had been in March, now it’s green, yellow, purple and brown. The vibrant, emerald green alone was a lot of color. Fallen petals lay strewn about, like a flower girl had dropped them walking up the aisle in front of the bride. The pickerelweed began to slowly give way to the lotus plants. I marveled at each lotus blossom we passed and each pickerelweed blossom, which were still abundant on our left. On covers of nature magazines are often photos of mountain meadows in full bloom, so many blossoms and colors – it felt and looked like that, looking out over the plants, I couldn’t see any water, making it easy to imagine I was sitting in a meadow instead of in a canoe in the water. 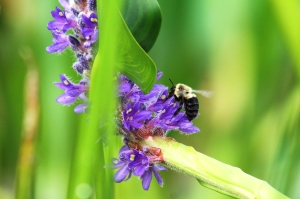 While I was marveling at a pickerelweed blossom, a bumble bee showed up also interested in the flower. Larry and I both thought it was fascinating to see a bee pollinating a flower out into the water. We sat and watched her for a few minutes. Watching bees pollinate is extremely mesmerizing and relaxing – such wonder and beauty, so much of the world’s beauty depends on these little creatures. 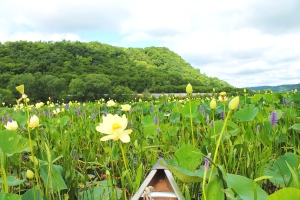 Some distance ahead of us, a train rumbled by, surprisingly not making too much noise to disturb our tranquility. Larry guided us through very slowly so I could continue taking photos. Shortly, the pickerelweed gave way to mainly lotus plants again. Larry continued to push the canoe through the thick patch of vegetation, which was easier than open water with the wind. I had hardly noticed the wind when we were heading the other direction. 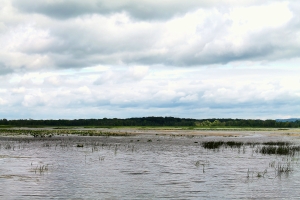 We left the lotus behind us. I took up my paddle too to keep us going against the fierce wind. About five minutes later we were back at the landing. I observed a white moth, which seemed to almost glow, stuck in the mire of duckweed and algae. The clouds seemed to have increased again. As always, I disembarked from the canoe first and Larry followed suit. While Larry backed the truck down to the landing, I looked out over the water again, enjoying its beauty and incredible healing powers for a few moments longer before helping Larry load the canoe. This place is filled with so much wonder. Reluctantly, I got back into the truck to depart. As we drove away, Larry said we should get out again soon and next time go up Lake McCarthy since the water was still high. He wanted to check on the growth and abundance of the wild rice.