Exploration in August (Part I) 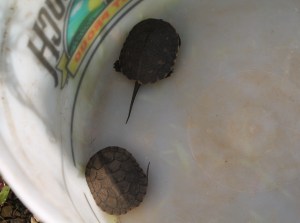 Over a month slipped by without my noticing, even Larry was wondering how it could be almost the end of August already. We decided it was time to get the canoe out again. We left Larry’s before 9:00 am. Larry said we’d canoe up McCarthy Lake since the water was still high enough and he wanted to see how much wild rice there was in the lake. However, instead of pulling off by the bridge right away, we continued driving along highway 84 cautiously. Larry said, “I want to look for any hatchlings first.” The baby Blanding’s turtles were starting to leave their nests and head for water, which means crossing the highway. Some people aren’t mindful of the turtles crossing and end up killing a few, so Larry and I drove on keeping an eye out for hatchlings. Larry explained, “There haven’t been many hatchlings this year. There’s a dearth in turtles and snakes this year.” So we weren’t expecting to find very many.

Not too far beyond the bridge, we saw one in the middle of the road. Larry stopped the truck and got out. He picked up the turtle and handed it in to me so I could look at it. “It’s so cute isn’t it?” Larry asked. It hadn’t pulled into the shell completely and I was able to observe its egg tooth. The tiny turtle didn’t even fill my palm – indeed very cute. I handed it back to Larry and he placed it in the vegetation, on the other side of the road so at least it would be safe from vehicles. We continued driving. Further ahead, we spotted another turtle. Larry stopped, got out and picked it up. He was about to place it on the other side of the road like he had with the other one, but he changed his mind because he’d be putting it in a cornfield. He brought it into the truck and put it in a pail in the truck, “I don’t want to release it into a cornfield.” I concurred with that decision. We didn’t get too much farther when we found another turtle. Larry picked it up and put it in the pail too, “I don’t want to release it into the bean field either.”

“No,” I agreed. We continued driving, rolling prairie replaced corn and soybean fields. At the wooden sign for the Kellogg Weaver Dunes, we turned around and headed back. Past the dunes and prairie, the fields and state land, we turned right on to a narrow drive on to state land bordering McCarthy. Larry parked the truck and took the turtles out. There was a thick line of trees in front of us and to the right of us. In the trees in front of us must be a pond. Larry released the turtles there saying, “There. Promise me, you’ll grow to be big turtles.” I had stepped out to take a look but the mosquitoes were so thick coming out of the trees, I quickly retreated back to the truck. Larry was close behind me. 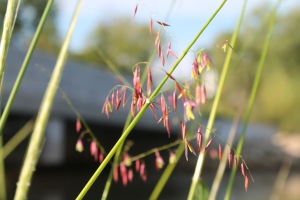 We pulled back on to the highway, heading toward the bridge. No sooner had we pulled on to the highway and there was another turtle in the road. Larry stopped the truck and hopped out. He returned to the truck with the turtle. Handing it to me he said, “We’ll release it in McCarthy.” I was delighted to hold the baby turtle, so small and fragile. I held it up so I could look at it. Tail, head and legs were pulled up into its shell, eyes peering out at me. I was wonderstruck. Again, we hadn’t made it very far before we stopped to rescue another one. Larry handed that one to me as well. I was thrilled. I liked the feeling of their feet crawling on my palm, their little toes and tails tickled. We were surprised and delighted we hadn’t found any dead ones yet. 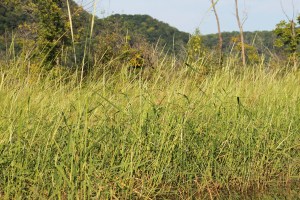 At the bridge, Larry pulled off and backed the truck up to the canoe landing. The plants had grown quite tall since May. Curly dock, golden rod, some grasses and plants I couldn’t identify. Larry told me to put the turtles in the pail to bring along with us. I did so, then grabbed my camera and hopped out. Larry had already climbed into the back of the truck to unfasten the canoe. Together, we unloaded the canoe. While Larry moved the truck, I took in the changes of the lake since May. Other than the tall plants that we had to wade through to get to the water, the first thing I noticed was that the beaver lodge was completely hidden by plants. The plants, predominately cattails, and golden rod had grown up over the lodge. The trees, including those on the distant bluff seemed fuller and darker green. The vegetation across the opposite bank, along the smaller channel, was much denser, taller and greener. Now there was less variety in color, although some of the trees further up the channel had leaves beginning to yellow or turn orange. The water still perfectly mirrored the trees and bluffs, that hadn’t changed. And I still marveled in the beauty of those reflections. There was some cattails and sagittaria in the water along the edges, and towering wild rice plants. A large white bird flew off in the distance, west of us. I pointed it out to Larry; he identified it as a great egret. We got into the canoe and headed out. Larry told me I didn’t need to paddle.

“The wild rice is in bloom,” Larry said. We got close to a wild rice plant so I could see the flowers for the first time. They’re small and narrow like barley berries. Rose colored, dangling down like bleeding heart flowers. You wouldn’t expect a grass to have such a pretty flower. “Pretty, aren’t they?” Larry asked.

It was a beautiful day for canoeing, not quite so hot and muggy like it had been and there wasn’t much for wind. As always being on the water was relaxing and restorative – this time I wasn’t thinking about much, just enjoyed relaxing in the canoe and taking in the changes on the lake. What had been a very wide channel in May had filled in considerably with vegetation – a lot of wild rice.

Larry said, “There’s more wild rice here than I thought. We’ll go as far as we can. As soon as we start to get stuck we’ll turn around.” 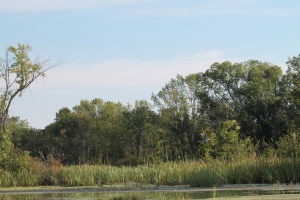 It was so peaceful, only the sound of birds interrupted the silence. We canoed up the “main” channel, following along our course in May. To our left, a long island of trees and stately snags, a gap in the trees then a more round island with a clump of trees; it was about here we spotted the sandhill cranes in May, while looking back at the snags at the end of the first island. A kingfisher, larger than I was expecting, flew from the trees of the second island to the trees of the first island, calling out loudly as it flew. It was thrilling to finally see a kingfisher. The barrier of vegetation between the channel and second clump of trees had grown much bigger, the vegetation far more dense and taller, the channel had become a tiny stream in comparison to its May width. The wild rice had grown up thick and tall, not just on our left but on our right too. We observed a marsh hawk flying over. Another kingfisher being chased by tree swallows.

Before heading up the channel, like we’d done in May, Larry paddled us over and into the alcove near the landing. The vegetation had grown here too and rimmed it, creating more of a pond like area. Cattails flanked the edge of the north bank. To our right, near the east bank, a great blue heron standing in the water among cattails immediately took flight. We watched it go, admiring its impressive wing span. Though a predator of our precious frogs, we still enjoyed the majestic bird. A few moments later, we startled a wood duck that had been hiding somewhere to our left, flew in front of us and disappeared quickly, squawking as it went. A green heron flew off from the cattails too, near where the blue heron had been but rather than flying northeast it went southeast. My attention was grabbed by the water’s surface – duckweed and coontail, and a thick layer of frothy green algae completely carpeted the water’s surface. 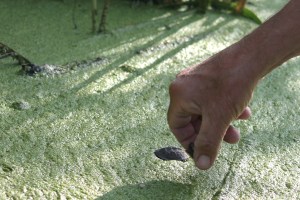 We glided into and across the pond to the north bank. Larry paddled west along the vegetation on the edge, looking for a good spot to release the turtles. He was looking for a spot where the duckweed and algae weren’t too thick. Gently placing them in the water, we sat and watched them for a few minutes before continuing on. “Well, we did our best,” Larry said as we left the turtles behind, hoping they would start swimming.