Larry and I put the canoe in about 8:30 am. We brought Hank with us again. Though it was about forty five degrees when we started it didn’t feel all that chilly, but the sky was clear, a beautiful sunny day, and only a very slight whisper of a breeze. It was an absolutely perfect day – and I was thrilled to be starting this beautiful day out with a canoeing outing with Larry. We put in at the bridge, heading up McCarthy again. We followed our previous course from a couple of weeks ago.

My eyes were immediately drawn to the bluff straight ahead of the canoe launch. Last time we were out it was still mostly green – there was no longer much green left, a lot of orange and russets – but what really caught my eye was a clump of fiery orange yellow trees setting the bottom of the bluff ablaze. The trees before me had progressed considerably, what had just barely started to have a tinge of yellow green was fully yellow, and a couple of trees that still had their summer green last time had completely lost all of their leaves, the change was incredible. The vegetation around the trees and in the water had still been mostly green with only a hint of brown but now was completely yellow brown. The one island of trees had only one tree left with its leaves. 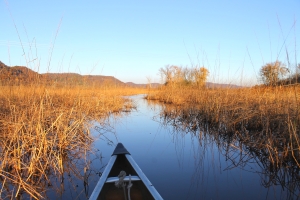 “Is the water level higher?” I asked.

“I’m not sure of it is or if it just looks that way because the vegetation has just senesced so much.”

The sun lit the marsh so beautifully and perfectly, everything had a warm, golden glow. The now naked trees rising up out of the marsh were so stately and elegant. The moon was still visible in the western sky. My eyes were again drawn to the fiery trees on the bluff, “Don’t those big tooth aspen stand out?” Larry asked.

“Yes. I was wondering if they were aspen.” They were so beautiful; the sun hitting them had a lovely affect.

The channel, meandering lazily through the wild rice became narrower. Although it had senesced considerably, the wild rice was still grand. The morning light was just perfect, I was awestruck by it, how it illuminated the beauty of the marsh and nearby bluffs. Soon the wild rice gave way, the channel opened up again, becoming several times wider than it had been. We glided past the last “island” of trees where we’d seen the muskrat, I scanned the vegetation for any sign of a muskrat, but there was none. It’s amazing how much the vegetation had grown up and out, the morning when we saw the muskrat we were very close to the “bank” of the island now we had to go much further out. Moving along at a good pace, we soon came upon the large yellow water lily patch which looked even sadder than before and yet in the amazing lighting it looked brilliant. Most of the leaves had dried and shriveled up. The stems were bent and twisted, most curled under at the tip. 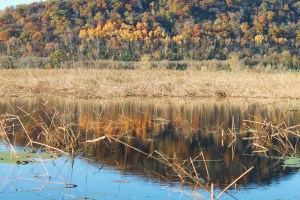 Though rapidly decaying, it retained an element of loveliness perhaps it partly had to do with the low angle sunlight, casting shadows creating a beautiful abstract painting. We plunged into the lily patch. At some point in the lily patch, Larry switched to the pole. I continued to revel in the beauty of the lilies and the colorful trees on the bluff. A red wing black bird perched on the same scrawny little tree, more like a twig in diameter than a tree, that I’d seen a red wing black bird perched on last time. I noticed more red wing black birds this time then I had last time – where had they been hiding? They chattered considerably, however it seemed more subdued than it had even a month ago. Larry noted that there were still a lot of those fly-like insects around, but they too had become less. We continued gliding along at a pretty good pace; it didn’t take long to get to the other side of the lily patch. The wild rice plants again took over dominance – they continued to be a marvel too me. 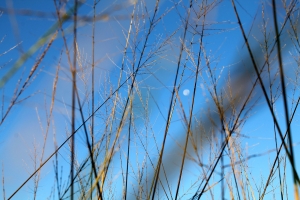 The small channel curved tightly to our left, west, almost like half an “S” around an impenetrable wall of vegetation, and curved back to the right. Larry poled us through a tangle of fallen wild rice plants. We passed through some duckweed – a green film on top of the water’s surface. Then we were back into more open water; Larry switched the pole for the paddle. The wild rice-cattail morass to our left was very dense. The cattails still had a little bit of green. We were close to the tree-filled eastern bank, on our right. Larry thought he saw a muskrat swimming ahead of us, once I figured out where he was looking the creature disappeared under the water. Larry steered us to the location but we didn’t see it; Larry said, “The disappearing act.”After a moment’s pause to see if it would surface again, we continued on. A muskrat lodge was almost hidden in the wild rice and cattails. Larry again wondered at the seemingly lack of muskrats. 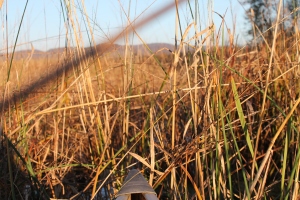 Suddenly we were hemmed in, the vegetation filled in the channel ahead of us. I thought, “Surely this is all the further we can go.” Larry stood up to get a better view of the marsh ahead of us. I was somewhat surprised when he didn’t turn us around but rather poled us forward through the wild rice plants. We were nearly enveloped by wild rice plants. We came to a slightly more open area; Larry continued on until we came to another wall of wild rice then halted. “Well I guess this is all the further we should go.” And so we sat, enjoying the relaxing quality of being on the water, and we took in the marsh. We went back and forth between chatting and sitting quietly. We sat there for about half an hour before Hank became really impatient to be on the move again, stepping up his whining. I saw a caterpillar like critter on a wild rice plant, Larry said, “It may be a remaining rice worm.”

Upon Hank’s insisting, Larry turned the canoe around and we headed back the way we came around the little peninsula with barren trees, along the “S” curve. I just loved those trees and the beauty of them being reflected in the water. As we were rounding the peninsula, a flock of trumpeter swans from the northeast flew by us, going southwest until they were almost to the bluff and then turned southeast. The beauty, majesty of the water, aquatic plants, bluffs, and blue sky was breathtaking – I was awestruck. I took in the stately, now nude trees standing up above the marsh on our right, west. We went back through the lily patch and from there changed our course to the other channel.

We were closer to the trees on our right side now – something about trees stirs something deep in my heart. I enjoyed passing by them. A few of these trees still retained some leaves but were working on undressing. We saw a glimpse of a pileated woodpecker – I would have loved to get a good photo but it was mostly hidden by twisting branches and flew away as we drew near. The channel curved lazily. I surveyed the vegetation at the water’s surface, mainly on our left, for any sign of a muskrat – but again there was nothing. The bridge was in view and we were drawing closer and closer to it. We were parallel to it as Larry paddled us to the landing. All too soon we had completed our outing – I have never quit canoeing because I am tired of it or ready to be done but rather because it is time to get on to other things. As we were leaving, Larry said, “If we can we should get out again next week, put in at Halfmoon and go up the backside of the prairie.”