Larry was already to go, other than grabbing another cup of coffee, when I got there so we didn’t waste any time getting on our way. Of course, Hank came with us. While we were driving along highway 84, I took in the prairie. The large area of little blue stem, just before Pritchard’s road, was especially eye-catching, now an attractive dark whisky color. “It’s so beautiful!”

“It’s even more beautiful after a light snow and low angle sun light filtering through it,” Larry explained. Hank was whining a bit as we drove along, so Larry let him drape his paws between the front seats with his head snuggling Larry’s arm. I continued to take in the rolling prairie as we drove along.

We turned off highway 84 on to the West Newton road. Down the road, we left the prairie and entered a floodplain forest. When we turned into Halfmoon Lake Landing and went down the drive to the canoe launch, Hank perked up. He jumped back on to the back seat and stood at point looking out the window, really excited.

Larry responded for Hank, “I know this place. I like this place; I have fun here!” Hank was indeed eager. Larry backed the truck in towards the landing – nothing more than a worn trail to the water’s edge. When allowed, Hank jumped out of the truck and ran around. Larry climbed into the bed of the truck to unfasten the canoe. Then I grabbed the end of the canoe and slowly walked with it until it was far enough out so that Larry could set the other end on the ground using the rope. He jumped out of the bed of the truck and picked up the other end of it; together we carried it the twelve or so feet to the water’s edge and set it down in the grass. Then Larry moved the truck. The banks of Halfmoon Lake are lined with trees and covered in grass – a diverse plant life. While Larry moved the truck, I took in the beauty of Halfmoon – enclosed and secluded, quiet and peaceful – the naked trees reflecting in the water, along with the patches of blue sky and clouds. Water and trees and quiet, my heart was at home. 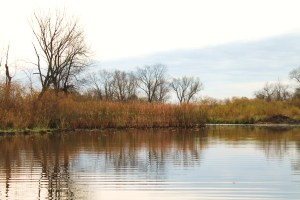 Larry returned and we slid the canoe into the water. Larry held the canoe in place, close to the bank so that I could step in. Once I was in and seated it was Hank’s turn to get in. As always he wanted to swim instead of sitting in the canoe. “Hank, kennel,” Larry commanded a couple of times before Hank obeyed and jumped into his spot in the middle of the canoe. It felt so great to be on the water again, I could just feel my body relaxing. I was ready for another adventure. Larry slid the long pole into the bottom of the canoe and handed a paddle to me, “Here’s your blade.” Then he was just about ready to step in the canoe himself when he said, “I forgot the life jackets. Better grab those in case the warden’s out.” Before going back to the truck he commanded, “Hank, stay there. Stay, Hank.” Larry walked back up the short trail to the parking area. Hank didn’t stay – with a forceful leap that launched the canoe out into the water several feet from the bank, he ran after Larry, leaving me a drift. Thankfully, I had a paddle and there wasn’t a current or breeze. Even so, it still required some effort to pull the canoe back to the bank and position it such that the stern was close enough for Larry to grab a hold of without having to step into the water. Of course, I enjoyed the whole thing, steering and paddling the canoe is exhilarating and it was so exciting to be able to successfully, perhaps not quite as gracefully as Larry, maneuver a big canoe all by myself! (This of course planted the thought of getting my own, smaller canoe that I could load and unload and carry all by myself; though it would never replace a canoe outing with Larry.) I managed to get the canoe back to the bank around the same time Larry returned, light heartedly scolding Hank, “Hank, that’s not what you were suppose to do – pushing Bethany out in the water.” He tossed the life jackets into the middle of the canoe and grabbed on to the canoe. He instructed Hank to get in and then stepped in himself. Then Larry shoved us off, paddling us slowly down the lake. My paddling contributions were done for the day – it was easy paddling so Larry didn’t need the help and so that I was free to take photos as we glided along. 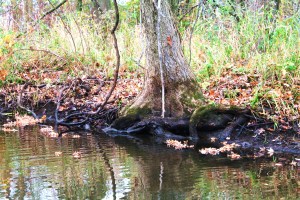 I was extra thrilled about this canoe outing because we were exploring new territory for me and unlike McCarthy, Goose Lake and the Weaver Bottoms, Halfmoon Lake felt more enclosed, not so vast, by its higher banks lined with trees, there wasn’t an empty space beyond those trees, they were like a wall around us – this gave it a more secluded and quiet, peaceful feeling. (I do like the other three places too and so very thankful for the wildlife I’ve seen and photographed in them, however, I think Halfmoon has become my spot, my special place.) As we started off Larry explained, “The water level will start to go down soon.” There was a mass of cattail plants, almost completely yellow brown now with a line of green across them, ahead to our left along the bank. Again, Larry explained, “You can see where the water level had been for a long time on the cattails.” I peered at the cattails more intently, and sure enough, there was a dark line around each stalk (a continuous line across the whole lot) perhaps a foot (hard to gauge from this distance) above the current water level. I was a bit amazed the water had been that much higher – but then again it wasn’t really surprising given all the rain we had that ran off the land into bodies of water. A tree growing on the very edge of a bank had very intriguing roots, reminding me of the tentacles of Ursula, the sea witch from Disney’s The Little Mermaid; however they weren’t sinister in the least. Brown leaves pillowed the ground behind the tree and floated on the water’s surface in front of the tree – bringing to mind a scene from the classic Winnie the Pooh movie; good storytellers draw on experience and observation. The water rippled gently, blurring and distorting the mirrored images of the tree and the vine hanging on to it. The roots that had been under the water were blackened. A green fungus grew in patches on the base of the tree, even going down on to the roots.

With so much to take in and observe my eyes again shifted to our left, back towards the cattails. Trees looming up behind them were now completely nude, having already dropped all of their leaves. Now each branch is exposed and one can see the form of the tree, a stately beauty and air about them. The cattails seem to come almost to a point, with a handful marching out a little further than the others, a small gap between them. A channel branches off, perpendicular to the “main lake” we were on, the cattail’s point in about a right angle. The channel is narrow. Across the water from the cattails is a good sized beaver lodge, a heaping pile of sticks, strategically placed, packed with mud to hold it together in a dome- like structure. A beaver lodge is always a source of excitement and wonder for me! I am awed by its builders and admire their ingenuity. Wonderstruck by beavers’, merely large rodents, ability to alter a habitat; there is so much diversity and life in beaver ponds and meadows.

Larry observed, “That house looks lived in.” I would have loved to see one of its residents. The bank rose up above the lodge into a plant covered mound – still yellow green. My attention was pulled to the water surface near the cattails, the water rippled outward in rings – something had broken above the water’s surface, and then quickly dropped back down. We observed several of these disturbances in the water. “Something just came up to the surface over there,” I said.

Larry replied, “Fish jumping. There’s another one among the cattails.” As we were passing the side channel, I heard the water erupt as a fish jumped high and smacked the water as it fell back beneath the water’s surface – of course it happened so fast I was unable to see it.